Looking One Day Beyond

Shortly after launching this blog, I wrote about the difficulties of researching my husband’s great-grandfather, Chicagoan John Tully. For one thing, I had a handwritten copy of John Tully’s obituary obtained from Agnes Tully Stevens’ papers, but I couldn’t find the actual newspaper issue where the article was published. All I could find was a cursory mention of his passing in the Chicago Tribune one day after his death in February, 1907.
Perhaps it was the gloom of today’s rain, or perhaps the melancholy that pervaded a day spent at a close friend’s funeral, or maybe even the seemingly misplaced misfortune of coming home to a house that suddenly developed a wiring problem leaving our family without electricity well into the night. Maybe it was thanks to a response to a post on a genealogy forum. Whatever it was, I decided to revisit the obituary problem and see if anything new surfaced.
What I found was that, had I looked one day beyond where I cut short my search so many months before, I would have found, nearly word for word, the very news report I was seeking. 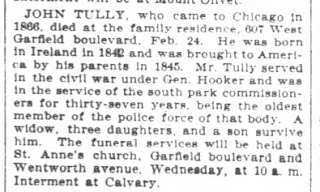 John Tully, who came to Chicago in 1866, died at the family residence, 607 West Garfield boulevard, Feb. 24. He was born in Ireland in 1842 and was brought to America by his parents in 1845. Mr. Tully served in the Civil War under Gen. Hooker, and was in the service of the south park commissioners for thirty-seven years, being the oldest member of the police force of that body. A widow, three daughters, and a son survive him. The funeral services will be held at St. Anne's church, Garfield boulevard and Wentworth avenue, Wednesday, at 10 a.m. Interment at Calvary.
My handwritten copy of the text gave a few further directions, mentioning “St. Anne's church by carriage to Calvary Cemetery” (perhaps a line modified by the editor) and a directive to “Ontario and Manitoba papers (Canada) please copy” to assure that John’s parents’ relatives who remained in Paris Village in Brant County, Ontario, and his eldest sister Johanna Ryan’s family in Winnipeg would receive word of his funeral details.
Other than that, I’d call it a match worth the satisfaction of the hunt. Makes me want to pull out those other, unmarked articles and see what hits I can find.
© Copyright 2011 – 2022 by Jacqi Stevens at 2:55:00 AM
Email ThisBlogThis!Share to TwitterShare to FacebookShare to Pinterest
Labels: Chicago, Newspaper Clippings, Ontario Canada, Tully