Starting at the End of a Long, Sad Story

In grabbing an envelope addressed to Agnes Tully Stevens at her Eggleston residence to scan for yesterday’s post, I just so happened to lay my hand on the very item that wraps up a tale from her in-laws’ side of the family.
The envelope itself, postmarked September 12, 1947, was from the pastor of a Catholic church in Fort Wayne, Indiana. Inside, along with a note of thanks, was a receipt for two hundred fifty dollars acknowledging Agnes’ donation to Precious Blood Church for fifty high masses to be sung in the names of her in-laws, John Kelly and Theresa Blaising Stevens. 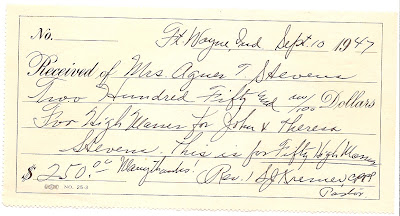 I hadn’t planned on jumping into the middle of this stream of family history, despite having mentioned feeling led to do that very thing. It seems too confusing to have to explain the back story for every unusual detail. And yet, as I prepared for an orderly unfolding of the tale by organizing the personal papers of Agnes Tully Stevens, the first letter in the collection that my hand found to transcribe was from this same Theresa Blaising Stevens.
A chatty letter, it might have seemed to be—except that I know it was written barely a month since the passing of her stepson, Agnes’ husband William. In spots seeming like the mild meanderings of recently-onset dementia, at times bordering on the “old” and “crotchety” that often become handy descriptors of the aged, the message tucked between the lines unpacked the nuance I had suspected was always there.
Theresa’s letter was long—too long to post in one day’s entry. It consisted of two sheets filled front and back with nary a thought to margins; perhaps paper was a precious commodity for this widow. And it requires its own tour guide to provide insight on references.
With enough requirements to obligate a week’s worth of blog space, a slower pace will allow her commentary to unfold in a clearer manner. I’ll start this brief tour with an overview of Theresa’s pertinent life information tomorrow, then wrap up her letter in sections, posting a bit each day until completion—filling in the blanks with data I’ve already uncovered on this immigrant from Alsace-Lorraine who filled the role of surrogate mother for two young Indiana natives.
© Copyright 2011 – 2020 by Jacqi Stevens at 2:54:00 AM