The Rest of Ralph's Story


In trying to learn about this young man portrayed in an abandoned photograph I found, figuring out who Ralph Pollock's parents were may have resolved one question, but that obviously led us to other questions. Mainly, if Ralph's father was still alive—not to mention, remarried—why wasn't Ralph still living at home? Why was he living with an aunt and uncle, even as early as the 1885 Colorado state census record for Greeley, just four years after he was born?

If Ralph's father, John Pollock, had been in such a rush to remarry, the presumption would be that he was seeking someone to serve as surrogate mother to his infant son. Yet, by the time John married Flora Forrest, Ralph was nearly a year old. Perhaps Ralph was already under the care of his aunt and uncle, long before John had remarried.

Then, too, there have been moments in history after a father remarries when the subsequent wife declares that she is not willing to raise the unfortunate step-children. Perhaps seventeen-year-old Flora was of that persuasion—though I doubt it.

Another possibility is that John Pollock's location might have been farther out in the country than would be of benefit to a bright young man interested in advancing his education. On the other hand, Franklin Pollock, Ralph's uncle, lived in the city of Greeley, at least in his later years.

In the 1900 census, when Ralph was nineteen years of age, he was listed as a student. Even later, he was still living with his aunt and uncle in Greeley and listed as a student in the 1906 city directory. By that time, Ralph would have been twenty five years of age. Since Greeley was home to the University of Northern Colorado, I suspect by that time, Ralph was well along in gaining an advanced degree from the then-seventeen-year-old college.

That may well have been the year in which Ralph graduated, for the next time we find him, he was exchanging wedding vows with one Irene Dorothy Gazelle in Alameda County, California. That was on February 18, 1909. By the time of the 1920 census, the couple was living in nearby Contra Costa County—strangely, the same place where many of my orphaned photographs originated—and Ralph was working as a chemist. The family had now grown to three, with five year old Carleton joining Ralph and Irene—although introducing a family mystery of his own with a listing showing his father to have been born in Spain, not Colorado.

From that point on, Ralph remained in California, though eventually moving to the southern part of the state, where he continued working as a chemist for a "research" organization, according to the 1930 census.

Long before that point, Ralph's father John had moved his second family from Greeley to Seattle, Washington—likely by 1904, judging from the birth of John's youngest son as given in the 1910 census—making me wonder whether Ralph even kept up much contact with his father.

Eventually, at the age of ninety three, Ralph Pollock passed away in San Bernardino County, California. As an interesting coda to Ralph's life song, I noticed he was not buried nearby, in one of southern California's many sprawling cemeteries, but was returned back to his hometown in Greeley Colorado. There, his headstone can be found in the Linn Grove cemetery, included in the family plot of the Pollock family. 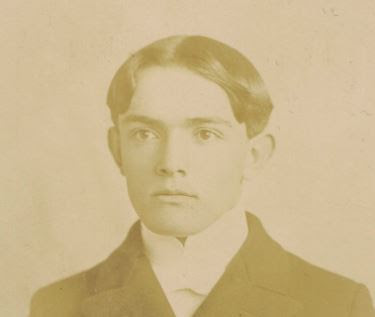 Above: From an undated photograph in the collection of Thirza Browne Cole, labeled Ralph Pollock. Photograph currently in possession of the author.
© Copyright 2011 – 2022 by Jacqi Stevens at 2:56:00 AM
Email ThisBlogThis!Share to TwitterShare to FacebookShare to Pinterest
Labels: California, Colorado, Family Photos, Pollock