In the stories of many families settling in the New World were sequels of their original emigration. Having left their European origins during times of upheaval—such as the famine in Ireland—they settled in what later became a temporary resting place. Not long afterwards, it seemed new vistas opened up to them. The lure of land, or fortune, or other enticing promises called them further westward.

In the case of our immigrant ancestors Denis and Margaret Flannery Tully, having left their village in the northern reaches of County Tipperary, they brought their family to another small town in what, in the 1850s, was called Canada West. There, they raised their children Johanna, Michael, Patrick, John and Margaret—and welcomed baby William to the household upon his arrival in Brant County, Ontario, in 1850.

By the 1870s, as I’ve mentioned before, the now-grown children of Denis and Margaret had all gone their separate ways. My focus in the past, of course, was to write about our direct line, descending from their son John. However, now that I’ve been back in touch with another couple distant Tully cousins, I’d like to pursue their line, which began with John’s older sister, Johanna.

Johanna’s was such a story of further emigration. I always knew her family had headed west, because of several reminders passed down to us from our own relatives. Even John Tully’s own 1907 obituary included the words, “Ontario and Manitoba papers, please copy,” signifying instructions to the editors of newspapers in those Canadian locations to also run the Chicago obituary in their localities.

It was Johanna’s branch of the Tully family for whom the Manitoba instructions were placed. But her story wasn’t quite as simple as a solitary move directly from Paris, Ontario to Winnipeg, Manitoba. Her emigration route took her—and quite a few other relatives in her traveling party—through both many miles and many changes.

With the help of some now-six-year-old notes from this distant Tully cousin, I’d like to revisit the details of Johanna’s story this week and, along with several documents now added to online databases since I last pursued her history, see what else can be discovered about this family and their journey westward. 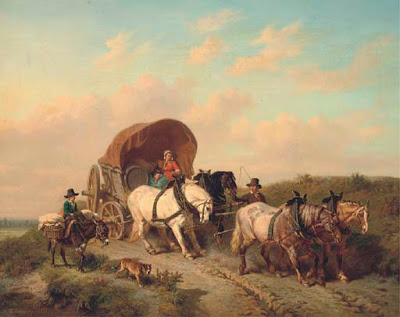 Above: "The Unwilling Traveler," 1856 oil on canvas by Belgian-born artist, Charles-Philogène Tschaggeny. Courtesy Wikipedia; in the public domain.