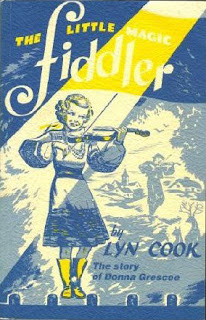 Whoever the child Donna Grescoe was that I met through the saved papers of Agnes Tully Stevens, the adult Donna Grescoe has become a living legend. While Wikipedia boasts no mention of her—other than a “stub” linked from the Wikipedia page for her Winnipeg violin instructor, George Bornoff—a Google search reveals nearly twenty pages of results for her name.

Among those pages I found out that, in later years, she was a founding member of the Manitoba Conservatory of Music and Arts, where a scholarship to encourage young violinists also bears her name. At the University of Manitoba, the Centre for Ukrainian Canadian Studies honors several creatives from various artistic disciplines—all Manitobans mentioned because of their shared ethnic heritage—including Donna Grescoe.

Though the professional accolades are numerous—and over a significant span of decades—the most fascinating discovery for me, though, was that her childhood experience was turned into children’s literature in 1951. Called The Little Magic Fiddler: The Story of Donna Grescoe, the book came from the pen of prolific children’s author Lyn Cook and was illustrated by Stanley Wyatt.

The book itself was thoroughly critiqued as a significant contribution to the multicultural efforts in Canada, as explained in the 2011 Netherlands publication by Miriam Verena Richter, Creating the National Mosaic: Multiculturalism in Canadian Children’s Literature from1950 to 1994. Within that work, I was delighted to see a quote featured from the afterward of the original story that “all the events concerning Donna and her violin…the broken fiddle, the scholarship and the years in Chicago and New York are true.”

Somehow, I now want to turn the clock back to that 1951 publishing date to obtain a copy of Donna Grescoe’s story—fictionalized though other parts may be—to see what was mentioned of that earlier Chicago year.
© Copyright 2011 – 2020 by Jacqi Stevens at 2:42:00 AM