And Then, To Raleigh

Receiving the invitation to the events surrounding the installation of the Bishop-elect of Raleigh, North Carolina, must have been quite the moment for the household of William and Agnes Tully Stevens. Not only was there the December, 1937, Ceremony of Consecration for The Most Reverend Eugene Joseph McGuinness in Philadelphia, but it was followed, after the New Year, with the actual Installation Ceremonies at the site of the Cathedral in Raleigh. Enclosed within the packet that included the invitation to the Philadelphia event were two smaller cards extending this second invitation: 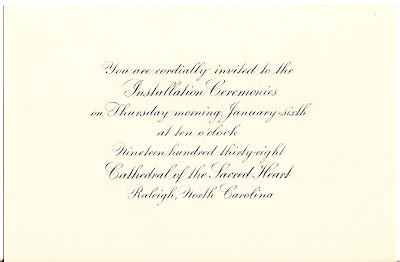 You are cordially invited to the
Installation Ceremonies
on Thursday morning, January-sixth
at ten o’clock
Nineteen hundred thirty-eight
Cathedral of the Sacred Heart
Raleigh, North Carolina

Though I am sure Will and Agnes did not take the occasion to make the journey from Chicago for either of these two occasions, the thought that was extended with the gesture of the invitation meant enough for Agnes to tuck the whole set of invitations among her treasured papers—one of those kept until her passing in 1985.
© Copyright 2011 – 2021 by Jacqi Stevens at 2:39:00 AM