The Rest of the (Very Short) Story

Two weeks shy of an exact twenty one years after Effie Woodworth sent her grandson a letter lecturing him on his lack of respect for a family name, she followed with another letter to the same family. Only this time, Earle Bean had been dead for over a year; this letter was to Earle's widow, Marilyn Sowle Bean. Marilyn was dealing with the dire possibility that her husband's fate, owing to Marfan Syndrome, might one day become the same story for her son.

Ironically, the letter began with Effie—the same one scolding Earle for dropping the "e" in his given name—apologizing for not remembering how to spell Marilyn's name. I'm not sure how to read between the lines on this one, but when I found it, Effie's May 1957 letter had tucked within its envelope that original letter to Marilyn's then-ten-year-old husband about his name—likely left just the way Marilyn had stored them.

Along with the earlier letter from Effie was a newspaper clipping, two columns' length cut from an unnamed and undated newspaper, held together with a straight pin. On her 1957 letter, Effie added a note, "You see I have had that clipping about 30 yrs." She was right; it was almost exactly thirty years.

Headlines to the story read "Surgical Feat Performed on Baby Here"—the "here" apparently meaning the city of San Francisco. The baby was Effie's grandson, Earle's twin brother Merle, who unlike his womb-mate, had failed to thrive in the first year of his life. At nine months, while Earle weighed twenty three pounds, his twin weighed only eleven.

I had long known Earle had a twin brother, and though I knew he had died just short of what would have been his first birthday, I never knew what happened to him. According to the news article—replicated, though without his name, in an article in the San Francisco Examiner—the surgery was to repair a ruptured diaphragm, which had caused the infant's stomach to protrude and press against his lungs.

The procedure involved a two-step process, with one surgery approaching the site from the baby's right side, pushing the stomach back into place, and a follow-up surgery would correct issues on the left side. The medical feat was brought to the attention of the press by Merle's other grandmother, Ella Bean—incorrectly reported to be Merle's own mother. Effie's letter continued with the explanation that the child's aunt—Leona, herself a public health nurse—said that physical malady was not what killed Merle, but that he had erysipelas. However, the child's mother didn't agree, and neither did Effie, who launched into a long explanation in her letter of all the people in the Woodworth family who were troubled with hernias.

Whatever it was—and Effie, with her extensive knowledge of Woodworth family history, may have trumped the professional opinion of the child's aunt—nine month old Merle may have survived the ordeal of the two surgeries in May of 1927, but by July, one week before his first birthday, he breathed his last. Whether the surgery helped, hindered, or didn't make any difference at all, Maude Woodworth and her blind and deaf husband Samuel Bean had to say goodbye to their baby boy.

In searching out the data regarding our family's story, we strive to obtain the names, dates, and places  to record each person in the family constellation. We see some living long, perhaps even living past the century mark, while others' life stories are far more brief in the telling. Yet sometimes, the only way to fully know the story is not solely by governmental documentation, but through the gift of personal recollections. Finding the treasure trove of Marilyn Sowle Bean's memorabilia at the antique store the other day affords me that peek into the minutiae of just what happened in Merle Bean's very short life. 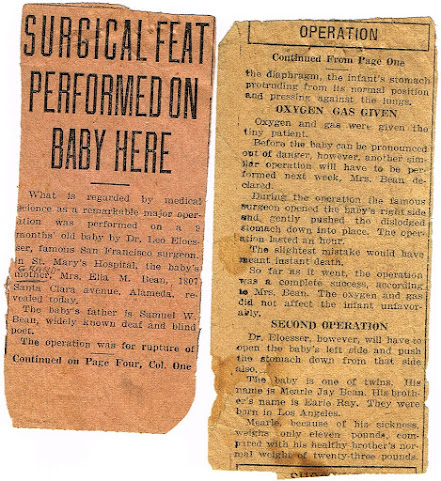