A Letter Circles Back Home

Have you ever written a letter to family, only to find it returning to you, years afterwards? That's what just happened to me.

Yesterday was the day set aside to head to the antique shop in town where a newfound genea-friend had, earlier this year, alerted me about some family photographs for sale. Since the store is soon closing for the last time, it was important for me to get down there before I missed my chance to regain some of the photographs once owned by Marilyn Sowle Bean.

On the appointed day, I met with the store's owner, who had graciously set aside all she had assembled of the remains of Marilyn's collection.

To cut to the chase on the day's outcome, I suppose I should start out with the hackneyed offering: "first, the bad news." There were no remaining photographs. While I don't quite understand the explanation, apparently an "estate liquidator"—sounds so ominous!—had come in and removed all the photographs. Just the photographs.

The good news is that, despite the loose-leaf condition of the remainder of Marilyn's mementos, the store owner kept noticing the same names, figured the items all belonged to one family and had, over the years, assembled them into one collection. There were newspaper clippings, club newsletter announcements, and letters—including one letter written to Marilyn from me.

"Hey, that's my handwriting," I blurted out upon seeing the envelope. I hardly expected to find my own writing becoming part of the ephemera for sale in an antique store—at least not yet!

The letter, while brief enough to fit on two sheets of stationary, was written on the occasion of having returned from a visit to Belle Woodworth, wife of Marilyn's husband's uncle—the one whose several sons manifested some form of Marfan Syndrome which lately has prompted me to search the tree for signs of which line might have carried any genetic propensity for the disease. Apparently, that same thought had been on my mind when I first began researching Marilyn's family tree so long ago.

The Bean family was my first foray into genealogy, so I was surprised to see how much information I had already laid out for Marilyn. The letter contained only a thumbnail sketch—and most of that, thanks to the documents assembled by a Woodworth cousin in that pre-Internet era of research. But much of it has been since borne out by my exploration last month.

Besides that letter to Marilyn, there were several others, including notes from her husband's maternal grandmother, Effie Williams Woodworth, on another side of the family's history. While much of the information I've already gleaned from the online resources we now find so beneficial for research, it is the little details newly found which bring these stories to life—stories which I hope to share early next year.

We'll keep in touch, this storekeeper and I, in the hopes that something else might materialize from what used to be Marilyn Sowle Bean's collection of memorabilia. In all likelihood, whatever photos remained from her original collection are now parted out and scattered in multiple directions. But we can always hope that something else will show up from the storeroom, or when the new owner sells those photos, or...or... 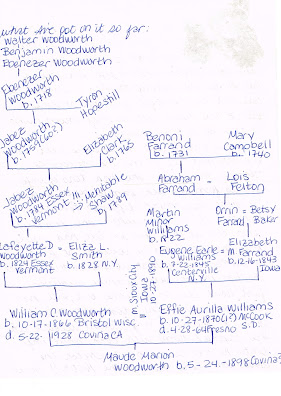 Above: Excerpt from letter to Marilyn Sowle Bean, outlining portions of the family tree of her mother-in-law, Maude Woodworth Bean.