The value to a family historian of finding a document which included not only country of birth, but city as well, cannot be understated. Finding information on Russian immigrant sailor Michael Melnitchenko was not difficult, thanks to his frequent appearance on lists for crew members of ships coming in and out of the port of New York, but they were not the fine details a genealogist would prefer to gather.

All I could tell from his occupational records was that his age placed his year of birth approximately in 1897. I knew, also, that he sometimes went by his patronym—written by Americans as Ivanivitch—or at the least, that the patronym was represented by what we would consider a middle initial.

And here was, out of the blue, a draft registration card for someone with nearly the same name—Michael Ivan Melnitchenko—also born in 1897. But in this case, the document added month and day of birth, plus the name of the specific city.

As it turned out—you can be sure I scoured every crew listing I had found on our Michael—there was a reliable record for his full date of birth. That date appeared, after he had petitioned to Americanize his surname, on a naturalization card in 1953—and not in the Pennsylvania of this other Michael's draft card, but listing our Michael's known address in New York City. The date of birth? January 11, 1897.

But wait! That was the same date listed on the other Michael's draft information in Pennsylvania: January 11, 1897.

While, before this point, it might have been possible to consider that the two Michaels could have been related—possibly two cousins both named after the same grandfather—the patronym would have complicated that consideration. But adding in the identical date of birth, I had this sinking feeling I was looking at two records for one man.

What was a New York sailor doing on the far end of Pennsylvania?

This is where I started delving into every possible exploration of this Pennsylvania puzzle. I looked up everything I could find on Michael's employer, the West Hickory Tanning Company. I learned everything from their being named as a defendant in a government anti-trust suit in the 1920s, to the tragic injuries befalling some of their employees in 1940 in the midst of building a new warehouse for the expanding company. I learned that the West Hickory Tanning Company dealt exclusively in hemlock dry hide product, and that their sales rep was a company located in Boston.

Perhaps that was the only reasonable link: that the company shipped their product via the Great Lakes up to the Saint Lawrence seaway and then down the Atlantic coast to Boston. How far we reach to make an unlikely scenario fit.

Whatever the story, there was one research glitch which I failed to address. Apparently, in digitizing some of the draft records for a few states, including Pennsylvania, the reverse of one card was linked to the front of the next card. Going back to check, sure enough, the card for Michael in Forest County had, for its reverse, the height and weight data for someone whose card was stamped by the draft board in Pittsburgh. The card I would be more interested in was attached to the record of a man living in Philadelphia, but looking closely at the stamp on the reverse, it was for Forest County, on almost the opposite end of the state.

That card, more to the point, contained the description of a man who stood five feet and eight inches, with a weight of 170. More to our liking.

Still, as I scoured all the records, I did notice one other detail. In the earliest of the ship's listings I could find for Michael, even he had listed his height as a taller figure: five feet and ten inches in 1924. Perhaps his occupational hazards over the years had weathered him in more ways than one.

That, however, was not the only occupational hazard Michael Melnitchenko had encountered during his long career crossing the Atlantic. In double-checking all the crew listings I could find for him, my eye once again had caught that unusual listing which contained Michael's name in 1943. It wasn't the typical listing of crew members, but one in which he was the sole entry on a page labeled "Manifest of Alien Passengers for the United States." Why was a sailor entered on the passenger list for the S.S. John Rutledge?

It was on that form that, for place of birth, not only was the usual answer—Russia—given, but this time the listing also gave a city: Necolaeff. Turning back to that Pennsylvania draft registration card, I double checked the place of birth given there. That time, it was spelled Nikolaiev. For me, that was close enough—likely two different attempts at spelling a foreign name phonetically.

That, however, did not explain the scribbles and scrawled notes on the rest of that entry for Michael in the Alien Passengers manifest. Other than the startling note, "TORP," the comment, "repatriated seaman" also begged explanation.

You know I had to follow up on that one. And the more I searched, the less the story seemed to add up. 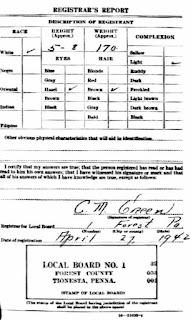 Above: More to my liking, this reverse of the scanned card for Michael Ivan Melnitchenko, attached in error to the subsequent record, shows the local draft board where he would most likely have reported in April, 1942; image courtesy Ancestry.com.

© Copyright 2011 – 2022 by Jacqi Stevens at 2:57:00 AM
Email ThisBlogThis!Share to TwitterShare to FacebookShare to Pinterest
Labels: Immigration, Melnitchenko, Passenger Records, Wars