A Tree for Genia

Sometimes, it is all we can do to record our own family history, let alone delve into the intricacies of anyone else's tree. But there are some times when a friend is so close that we want to ply our skills to do the same for the people who are close to us.

I suppose you could call Genia a family friend. I've known her all my life. She was in my family's circle long before I was. She was a friend of my mom during that heady twenty-something age when there were no limits to possibilities and dreams reached for the stars.

The two became friends through their work. Both were employed as dancers at one of New York City's favorite show spots, the Roxy, which boasted lavish stage productions as well as airing feature films.

There was one difference, though, in the work they both did at the Roxy. My mother had joined what was known as a precision line dancing group—before her time known as the Roxyettes, which, in a major shake-up when the original manager left the Roxy (along with several Roxy employees) for a new start-up known as Radio City Music Hall, meant the loss of that term when it morphed into the better-known name, the Rockettes.

Long after the remaining management of the Roxy recouped their losses and re-invented themselves, my mother—high-school-graduate fresh from her home in Ohio—moved to The Big City to pursue her show biz dreams. After years of ballet and tap dance training, even if she couldn't land an acting job, she could at least pay her rent with a gig at the Roxy.

Meanwhile, a Russian ballet dancer exiled from war-torn France had also made her way to New York City. Because shows at that time might include what, to us now, would seem an odd combination of entertainment features, a Hollywood movie might follow a 110-member symphony orchestra accompanying a ballet performance—the perfect venue for a dancer like Genia.

Somehow, my mother and Genia got to know each other over the months they worked together. My mom, alone in the city, would sometimes be invited to share holiday celebrations at Genia's parents' apartment. Eventually they became good friends, and kept in touch long after my mother married and moved to the suburbs—close enough, in fact, that after the birth of her first child (that would be me), my mom asked Genia if she would consider being named as my godmother.

Genia, of course, also moved on from her stint at the Roxy. For someone trained in classical ballet, that venue was a trying experience for those keen on pursuing their art, not serving as someone else's entertainment. Keeping in touch over the years with someone whose career led her to stages around the world was challenging, and eventually the two friends lost contact with each other. But for one last time—oddly, courtesy of the very skills learned in genealogical research—I was able to put the two friends together again.

I last wrote about that experience seven years ago, beginning a two-week series on Genia on exactly the ten year anniversary of her death. I wanted to see if there was any way to piece together her family's story as I had remembered it from my childhood. While the two weeks of focused research did piece together the explanation of just how the family arrived in New York from their former home in France, it still left many gaps—plus that empty hole which begs explanation on how, at first, a Russian family ended up living in France.

Ironically, after those two weeks of research, this genealogist hadn't even compiled an official family tree for Genia. The whole story was preserved in a listing of written resources and online links. But nothing more.

That was my inspiration for picking up the saga of Genia this year for my "12 for '21" listing of research goals. First order of business will be to build a tree for Genia, of course. In addition, considering the next step will involve research through foreign records I've never had experience exploring before, we'll need to take some time to get oriented to what is available to us despite the limitations of quarantines.

There is, however, another step which I realize would be helpful to take, as we explore what else might be learned about Genia's roots. That step, in fact, mirrors what I've learned in the past month in researching King Stockton, and through what was presented during that SLIG course on researching African Americans prior to the Civil War: a survey of the background, both historical and geo-political, will be necessary to thoroughly understand the forces which caused those immigrants to follow the path to peace and freedom they eventually took. 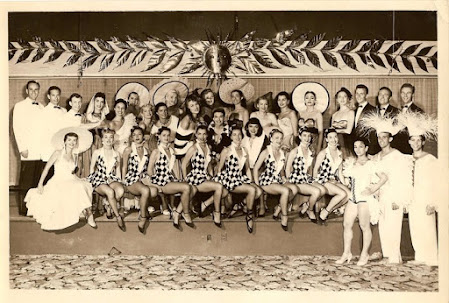 Above: New York City show personnel from the Roxy, undated circa 1948; photograph in possession of author.

© Copyright 2011 – 2022 by Jacqi Stevens at 2:45:00 AM
Email ThisBlogThis!Share to TwitterShare to FacebookShare to Pinterest
Labels: Friends of the Family, New York, Occupations