The State of Being Stateless

Turns out, researching my godmother Genia Melnitchenko's maternal line provides a good lesson in the necessity of grasping the history undergirding your family's story. In the case of Genia and her mother, Lydia, exploring historic events occurring during their lifetime not only helped explain why their records were sometimes stamped "stateless" but helped me locate a way to uncover Lydia's own origin.

Because I could not locate many records regarding Genia's parents, finding any information on the Melnitchenkos' origin required looking at as many passenger records as I could find—the one place where they showed up with regularity. Of course, for Genia's father "Michael," his occupation as a seaman left a bulging paper trail—and we'll explore more of that trail next week. But for Lydia, it seemed every record-keeper she encountered conspired to keep me from discovering even the most basic of details.

To start the search for Lydia's personal history, all I had was the constant of details on Genia's birth. Genia was born in Marseilles, France, on January 6, 1924. From that detail, shared in Genia's own paper trail years later, I knew I could pinpoint Lydia in Marseilles at least at the beginning of that year. But where did she come from, before ending up in France? It was those passenger records which led me to the answers I needed—but only gradually.

Because Genia began her professional dancing career at a very early age, I could find her in international travel records when she was a young fourteen years of age. Despite traveling as a professional "artist," on account of her age, she still had to travel under the supervision of her own mother, and many passenger lists cross-referenced Genia's entries with Lydia's.

Fortunately, at that early age, Genia had not yet begun using a stage name for performances, so finding records under Melnitchenko was possible. During a dance tour of North America—and under the name Olga—Genia apparently crossed the border from British Columbia into Washington state in early 1939 which, coupled with her mother's entry, alerted me to the fact that she didn't always go by the given name Genia. In fact, I learned to look for three given names—Olga, Genia, and the full name Eugenia—as well as to search for the three surnames she used during various times in her life.

In that border-crossing record, Genia's mother's card provided—or, let's say, almost provided—the details on her own origin. Just as Genia's card had stated her place of birth as Marseilles, the typist entering the details for Lydia apparently began typing that same word for Lydia's own place of birth: Marseilles.

That entry, however, was obliterated with a volley of "xxxxx" so that the requested information had to be added on the line below. As if that weren't enough to frustrate, whatever was typed in was superimposed on the preprinted portion of the form, so all I could decipher of the record-keeping wreck was a place name beginning with "Sou---" followed by the word, "Russia." As a finishing flourish, the anti-genealogy fates insured that the scan of the card was blurry enough to make deciphering the typewriting even more difficult.

Of course, I couldn't just stop the search there. It is in the multiplicity of records that we find the way to piece together the actual story. Fortunately, Genia traveled often, and along with her came her mother. The ship which brought the two to North America resulting in that 1939 border crossing in Washington was the S. S. Georgic, arriving in New York harbor in October of the previous year.

There, thankfully in a carefully typed format, was the entry for both Genia and Lydia. Genia's entry was included on a page with her dance troupe, but Lydia's was entered on a different page. On October 1, 1938, Lydia declared herself to be thirty nine and a half years of age and a native speaker of the Russian language. For occupation, oddly, she, too, was listed as "artist," despite traveling solely as chaperone for her daughter.

For country of birth, there was no surprise: Lydia claimed Russia. But for the entry labeled "city or town, State, Province or District," the answer didn't exactly line up with the "Sou---" I had already found. This form declared Lydia's location of birth to be a place called "Sonkhoman."

If you have raced ahead to try and find "Sonkhoman" for me in the listing of cities in Russia, you may have discovered what I already found: there is no such place. Granted, I will need to spend some time scouring any accessible historic maps of old Russia, or find a reliable gazetteer of the region.

Or...I could just heed my own advice and keep looking for more passenger records. Maybe, just maybe, another less-hapless clerk will have gotten the details right.

That, in fact, was what let me hit the jackpot, in a way. On April 21, 1947, the S. S. William Ford Nichols, arriving in Norfolk, Virginia, from France, included two names of interest on the ship's manifest: Olga and Lydia Melnitchenko. From their ages and Genia's characteristic occupational entry as dancer, I could tell these were the same two I was seeking, but there was something strange about their entry on the passenger list.

Yes, Lydia the housewife and Genia the dancer had indicated they could speak both French and Russian, and that their "Race or People" was Russian. And yet, for their response on the section labeled, "Country of which citizen or subject," each of them had entered the word, "stateless."

A note handwritten below the passenger listing provided more information, although in abbreviations.

Line two, signifying Lydia's entry followed by Genia's for line three, bore a term which, at first, looked to me like the name Hansen, followed by the word "stateless" in parentheses. In essence, the reason both women were identified as "stateless" was because of the time period in which they were traveling. In 1947, after the close of World War II—as at the close of the previous World War—there were many displaced persons unable to obtain travel identification from the country of their origin.

While the ditto marks on that entry referred to a previous line with the abbreviation "Fr PP"—most likely indicating "French passport"—the explanation for what turned out to be a Nansen passport was that it was a document originally devised in response to the new Soviet Union, in 1921, revoking the citizenship of Russians then living abroad.

If the Melnitchenkos could demonstrate that they were, indeed, out of the country by 1921 to confirm their eligibility for a Nansen passport, that helps me pinpoint the time at which they left for France—or wherever they first stopped after fleeing their homeland.

That specialized passport, first promoted by Norwegian stateman—and renowned polar explorer—Fridtjof Nansen, had originally been used after the close of World War I and through 1938 for what became known as "stateless" refugees. While Genia and her mother were certainly claiming that provision during their travels long after 1938, when the Nansen International Office for Refugees handling the processing of such claims closed, another department under the auspices of the League of Nations continued the work of refugee advocacy after that date, through their office in London—which may explain why some of the Melnitchenkos' travel documents referred to London as issuing office.

That little dose of history helped confirm the difficulties I had been told about in their family stories, and may well help pinpoint some dates in the Melnitchenkos' timeline of homeless wanderings. However, let's not forget that we arrived at the point of locating that very passenger record for a different reason: the quest to discover just where Lydia, herself, had been born.

Thankfully, this passenger list did not include clerical ineptitudes. Nor did it suffer from mishandling in the digitization process. Loud and clear, the document delivered the goods. Lydia—at least according to the passenger list for the S.S. William Ford Nichols on April 21, 1947—was born in a place in Russia called Soukhoum.

Great. Now, all we need to do is determine just where, exactly, that place called Soukhoum was located, back before the Russian Revolution. 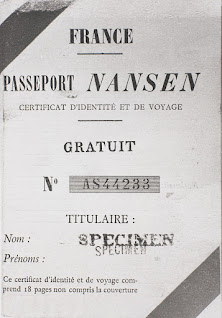 Above images: Top two handwritten excerpts from the 21 April 1947 passenger list of the SS William Ford Nichols, courtesy Ancestry.com; below image of a sample Nansen passport as it would have been issued in France, courtesy National Library of Norway via Wikipedia; all documents in the public domain.

© Copyright 2011 – 2022 by Jacqi Stevens at 2:48:00 AM
Email ThisBlogThis!Share to TwitterShare to FacebookShare to Pinterest
Labels: Friends of the Family, Melnitchenko, Passenger Records, Reflections on Research, Wars