Off the Shelf:
Home is the Sailor, Home from the Sea

How exasperating it is to find mention of a book dealing specifically with the topic we're researching, but lacking any reference to either title or author. That was the case earlier this month, when I ran across a forum discussion about the demise of the S.S. Richard Olney, Liberty Ship during World War II. The S.S. Richard Olney, of course, was the ship on which my godmother's father, Michael Melnitchenko, had served as Chief Officer during the time of that incident in 1943.

Thankfully, just this past week, I found another mention of that unnamed—and coveted—book and ordered a copy for myself, so it really hasn't been sitting on my bookshelf for more than, maybe, a hot second.

The book, written by Captain Erich Richter's daughter, Ursula McCafferty, was thankfully mentioned on the same website in which I had found mention of his receipt of the Merchant Marines' Meritorious Service Medal in 1946. Within a bibliography listing all publications regarding the Merchant Marines, the book was listed under the section for "Memoirs of World War II," under the title, Home is the Sailor, Home from the Sea.

As it turns out, the captain of the Richard Olney, who through his calm deportment in the face of serious threat in war time undoubtedly saved the lives of not only fellow crew members but also a division of U.S. infantrymen en route to support a vital operation at Salerno, was at one time a prisoner of war, himself. Born a German, during World War I, his ship had been captured by the British and he was kept as a prisoner in Australia. When Germany's merchant fleet was given as war reparations to the Allies at the close of the Great War, Erich Richter ended up moving his family to America. A career seaman, from that point he served on American vessels.

There was, indeed, a chapter devoted to the incident involving the Richard Olney in the book. How surprised I was, in opening to that chapter, to see a transcription of a letter regarding the event which had been written by my godmother's father as chief officer at the time. There is something about seeing the words of a document originated by a member of one's family which, at least to me, is transfixing. Seeing the name, Michael Melnitchenko, in print on that page seemed to magically transport me back to the memories of my childhood, walking alongside him on one of our visits to his apartment in New York City.

How I wish I would have known, at that time, to ask questions—many questions. But, as my cousin often ruefully admits, we wish now that we had known then that we should have been asking those questions. Though Michael Melnitchenko is now long gone—even his daughter has been gone for almost two decades—I wish I could have at least asked my mother if she knew of the experiences he had been through in his career. Although when they reconnected over visits, they always looked like they were engaged in so many deep and fascinating conversations, I doubt even she had any idea. 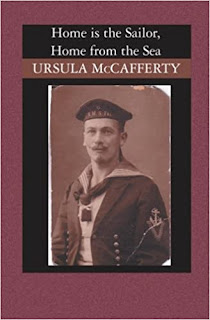 © Copyright 2011 – 2022 by Jacqi Stevens at 2:56:00 AM
Email ThisBlogThis!Share to TwitterShare to FacebookShare to Pinterest
Labels: Books, Melnitchenko, Wars