The key to unlocking the hidden story of someone's family through the generations is to remember that genealogy represents a chain of events. That chain is best examined when we start at the end and work our way, step by step, backward in time.

So it is with discovering the story of my godmother's family. Though she was, in my ten-year-old eyes, the equivalent of Cinderella's own fairy godmother, my Genia the ballerina came from a family with real flesh-and-bone stories, some of them undoubtedly tragic—and almost none of them known to me, the child who had met Genia's parents so long ago.

While it was quite difficult for me, as a child, to discover much about Genia's mother Lydia in her incapacitated state in old age, I remember so clearly Genia's father. It was he who usually met us at the train station where we arrived from our suburban home about a half hour's ride from the big city. He was the one who would navigate us along the teeming Manhattan sidewalks, leading us to his small apartment perched high above the bustling street below.

We would talk almost all the way, mostly my mom catching him up on news while my sister and I scurried along close behind them. I clearly remember looking at the leathery back of his neck, below his seaman's cap, and wondering what life had been like for him.

Now, after all those years, that I've taken up the notion to find out for myself about the Melnitchenkos, it isn't necessarily the wealth of digitized documents that may make this quest far easier than it would otherwise have been. It was Michael Melnitchenko's choice of occupation which provides me with a way to trace at least part of his life.

When, as a child, I first visited the Melnitchenko household in New York City, I had no idea Genia's father's name was Michael. For a child, an adult like that would of course be addressed only as Mister—despite the fact that I always called Genia by her name. That was, after all, what my mother did.

Years later, I first located Michael's name through his daughter's records—the same way we would navigate any research problem. Only for that rule of thumb, "Start with yourself," I needed to substitute Genia in the prime position.

The best places to find any records linking Genia to her father were her own travel documents. Though as a young dancer, she often was linked with her mother on passenger records, it was from records of border crossings and passports that the requested parent's name was often listed as her father, not mother.

I found a record giving her father's address in New York in a border crossing in Rouses Point, New York—one mile from Quebec in the northern-most tip of New York state—dated March 23 of 1950. That form helped me pinpoint when the Melnitchenkos actually established residency in the United States, as Genia stated that they had been in the U.S. from April 21 of 1947 through the point at which she had left for that trip to Canada in 1950.

Once again, the document helped verify that Genia's full name was Olga Eugenia, and that, although now "stateless," she had been born in Marseilles, France, on January 6, 1924. But the value of finding this document was that it provided the specific link naming her father as Michael Melnitchenko, and confirming their Manhattan address on Sixth Avenue.

Again, it was a travel document identifying Genia which enabled me to confirm her father's name. This time, though, I first needed the intermediary confirmation that, having arrived in America, the Melnitchenkos had requested to change their name to the shortened form, Melch. From an immigration card in Brazil for "Genia Melch," she reported her father's name as "Michel" Melch (likely translated from the English "Michael").

Having found the confirmation of Genia's father's name (at least in its Americanized form), it wasn't difficult to find him in his own travel records. Only this time, the senior Melnitchenko was not traveling for such glamorous reasons as appearing on stage around the world. His reasons for travel were far more practical: he was a seaman by occupation.

Though the collections of ships' manifests for crew members are far more limited than passenger records in general, I could find Michael Melnitchenko in several, making it possible to compose a (somewhat incomplete) listing of his years of service from the 1920s through the late 1940s.

At the first, I found him leaving Marseilles barely two months after Genia was born, hired as a fireman for the S. S. Hirondelle. The valuable addition in that discovery was that it revealed an alternate name for Michael—a patronym, a useful indicator of lineage in many countries, including Michael's origin in Russia.

The litany of crew listings was by no means thorough, for the next entry I could find wasn't until 1943, aboard the S.S. John Rutledge. That record, itself, requires us to revisit to glean further details, but for now, it provides us the confirmation of that middle initial, "I" for the patronymic Ivanivitch, in this record. By that point, Michael was forty seven years of age, and had attained the position of chief officer.

Other manifests confirmed his position on the crew of various vessels: the S.S. Pio Pico out of New York harbor in 1944, the S.S. J.D. Ross out of Marseilles in December of the same year, the S.S. Robert Toombs arriving in New York from Port of Spain in August of 1945, and the S.S. Clyde Austin Dunning, arriving in New York harbor from France in May of 1946—with the added detail that Chief Mate Michael had, by then, claimed a "length of service at sea" of thirty two years.

While that little excursion through the preserved and digitized records of various ships' crew listings wasn't primarily to assemble genealogical information, it did provide a broader picture of who Genia's father was. If nothing else, it helped a former ten-year-old understand why the back of a man's neck could appear so leathery, long after those thirty two years of service on the open seas.

The records, though, helped provide some other details I hadn't expected to need. While Michael was coming and going from the port of New York, there was another record drawn up for a "Michael Ivan" Melnitchenko, which made me wonder whether I was tracking one person with that unusual name—or two. 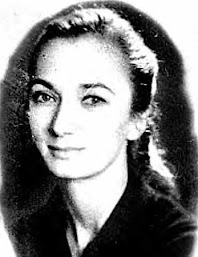 Above: Photograph of Genia Melnitchenko (listed as Genia Melch) from her application for temporary immigration to Rio de Janeiro, Brazil, in 1960; image courtesy Ancestry.com.