Checking on Another Sullivan

After what I discovered yesterday about the possible mother's maiden name for my latest research quest—finding the parents' names for Mark Falvey of Chicopee, Massachusetts—I am beginning to wonder whether I have uncovered a new rule: that all Irish immigrant family trees must include the surname Sullivan.

And yet, I didn't wish to be too hasty about that. After all, we need to put ourselves in our ancestors' shoes whenever we encounter a puzzling outcome in our research. The place where I found that Sullivan maiden name was in a death certificate. Think about it: what is farthest from one's mind, upon learning that a loved one has just died? Correctly reporting the maiden name of the long-gone mother of the deceased.

In a spotless hand, an official someone in Hampden County had drawn up the death certificate for Mark Falvey, ancestor of my husband's DNA match. There is no way I could fault that impeccable handwriting, or claim I had misread the entry. Sure enough, in researching all these members of a very extended Falvey family from County Kerry, Ireland, it is time to add yet another Sullivan to the mix. Mark Falvey was born to a woman named Margaret Sullivan—if, that is, we can believe that cool heads prevailed when his son stood in as informant for the official report. 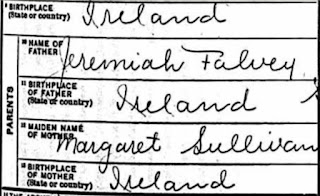 Just in case a stress-induced mistake was permanently captured for generations of genealogy researchers to perpetuate, I decided to take a look at other records to see whether the report could be replicated. Unfortunately, even though Mark Falvey's naturalization paperwork claimed his arrival in the States was when he was twenty two years of age—arriving in New York City, which I not only find odd, but can't trace through other records—there was no mention of his parents' names.

However, there are other documents. And, as documents of that era went, they often omitted some detail about the women in a man's life. Thus, Mark's marriage record reported that he was son of Jeremiah Falvey—but omitted any mention of the mother.

Fortunately, Mark was not the only Falvey to settle in Chicopee. Remember, my husband has another DNA match who traces back to one of Mark's siblings who also lived in that city. Those who are researching that area in Hampden County have ample access to additional records online. So, I took that same record set which included Mark's marriage entry, and searched for any Falvey who was married in that county.

In the search results, I could spot other possible candidates. That was the good news. The down side was that the transcription of the entries was less than optimal. Someone at Ancestry had indexed the parents' names for Bridget Falvey as Janey and Margaret. Obviously, something was lacking there. A similar result occurred for the marriage record of a woman named Johanna Falvey, whose parents were noted to be Samiah and Margaret.

Thankfully, the search results led me to actual copies of the documents, so I took a look at the real deal. Maybe my ability to read dreadful handwriting might tune up those previous attempts.

Sure enough, the actual register entry for the October 11, 1860, marriage of Bridget Falvey to James O'Brien could loosely be translated to read Jerry and Margaret Falvy. Of course, that record didn't include a mother's maiden name, either. And the other Falvey entry that could be found? Perhaps her much later wedding date—April 17 of 1875—did the trick, for this time, the bride's mother had a full identity: yes, although somewhat difficult to decipher, it looked like Margaret Sullivan was the wife of Jeremiah Falvey and the mother of Johanna Falvey.

Another Sullivan. All together now: groan.

What we have, with this exercise in seeking the mother's maiden name, is very possibly the link to tie these three Falvey weddings together. Thus, we can assume that Mark, Bridget, and Johanna were three siblings—or at least half-siblings—who somehow made their way to Chicopee from County Kerry, Ireland. We'll double check on that assumption tomorrow, as we get to know a bit more about Bridget, the sister of Mark Falvey (as opposed to his wife of the same given name). After that, we'll confirm what else can be found about Johanna Falvey's mother through the documents she left behind, as well.