These are Not the
Sullivans You're Looking For

It would have been nice if I could find a maiden name for Mrs. Charles Samuel Sullivan, mother of the three young Sullivan nephews we found living with their aunt in Toledo, Ohio. After all, the whole family had arrived from England, and, a generation before that, supposedly had roots in County Kerry in Ireland. Like a scantly scattered breadcrumb trail of fairy tales, it still might be enough detail to lead me to the family's origin—if, that is, I could identify Mrs. Sullivan's own particulars.

Alice K., or Alice L.—depending on which child's documentation one relied upon—was only provided a married name in those records. Thus, my hope was to at least find more details on her husband's records. Yet, try as I might, I couldn't locate a death record for him in Toledo. Of course, I couldn't be entirely sure he had died in Toledo, but since he had been buried there, one could presume there would be a paper trail providing more information.

Lacking that one resource, it would be difficult to again repeat the process of finding him, somewhere back in England—supposedly around London—and then differentiate him from all the other Charles Sullivans sure to be found in the vicinity. Without his parents' names, though, how was I to trace his generations back to that original Sullivan connection we had found linking that family with the Kelly family of my husband's heritage?

Stuck on that sticky detail, I decided to keep moving onwards. After all, I still didn't know anything more about Charles' wife Alice—other than that it was likely that she, too, had died in Toledo. Of course, it is certainly possible to locate a death record without a maiden name, so this was a plausible first step to take.

Fortunately, taking a look at FamilySearch.org, I located a promising death record for an Alice Sullivan who died in 1924. Granted, there could have been multiple Alice Sullivans living in Toledo at the time, but the key is always to look at the actual document, not just rely on a transcript.

Pulling up the record, I could see right away—even before spotting her husband's name—that it was the right choice. The address given for this Alice Sullivan was 324 Saint Mary's Street, the very place where the original aunt, Margaret Kelly, had started hosting her immigrant sisters from Ireland, before any of her nieces and nephews arrived from England.

Ecstatic about that find, the next spot my eyes sought was the line giving her father's name. After all, this is the clearest confirmation of maiden name, and I was all about cutting to the chase. Seeing that, though, I realized I had my answer all along. 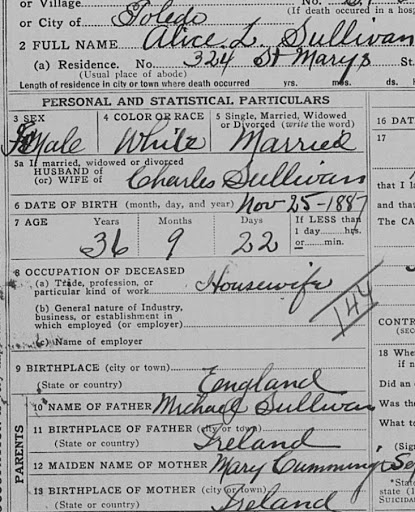 It was she who was the Sullivan connection to our Kelly family, not her husband. All those reports I found were reporting her maiden name. A Sullivan had married a Sullivan. Perhaps Charles was related to this Sullivan line as well, but until I find his documentation, I'll never know. In the meantime, I now have what I need to proceed one generation closer to the Kelly-Sullivan nexus in County Kerry: that other Sullivan's parents' names.