If a person can experience being foggy-brained, can one also become smokey-brained? That, at least, is how I feel after a solid two weeks hunkered down behind closed doors and windows to avoid the fallout of twin infernos not far from my home. True, I shouldn't complain, considering I never even had to flee my house in the wake of an evacuation order—when others no longer have a home to return to—but the incessant smoke has a way of seeping into every crevice. Including one's own grey matter.

It's been over a month since I've attended to some of my regular genealogy duties, like volunteer indexing of digitized records at FamilySearch.org. Try as I might to keep up with my once-a-month commitment, I could do nothing more than open up the site, stare stupidly at the projects currently needing help—like, why is the project for Papua New Guinea filed with the projects for North America?—and just walk away. For now.

Times like this call for some mindless yet productive activity—hence, my wandering thoughts about knitting last Saturday. Symptoms of a mind which fails to engage.

That's why, thanks to a post last Monday from Randy Seaver of Genea-Musings, I recalled the cataclysmic hatchet job scheduled for the end of August to remove small DNA matches (under eight centiMorgans) at Ancestry.com. The time had come; the deed was done. Through the haze, I wondered how my starred and color-coded small matches fared in my own account. (Randy's, by the way, were reduced by fifty one percent, according to his scientific calculations. I, on the other hand, could not possibly think straight enough right now to even come up with an estimate.)

I took a peek. Not so bad, it seems. I still have 30,201 distant matches—far more than I could ever process. Included in that number, though, are the many I had flagged for valid reasons like surnames shared in common. Those twelve color-coded surname groups plus my group of starred matches held firm in this latest re-adjustment. Thankfully.

That, of course, means there is a lot of work ahead—work to properly connect the match to the right distant ancestor in my tree, or to verify and discard as one of those false matches predicted by Ancestry. But at least we had the chance to buy ourselves some more time for further consideration. Something that even the most foggy-brained among us can appreciate, for the time being. 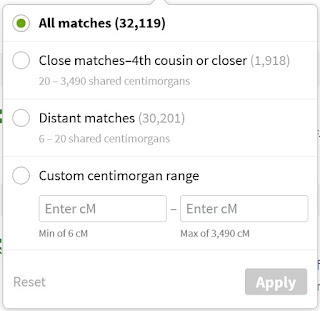