Why I Can Plunge Down Rabbit Holes
With Wild Abandon 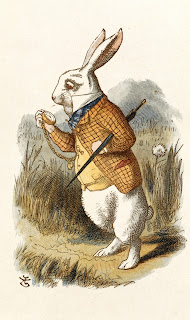 Ever since Lewis Carroll sent the unwitting Alice scurrying to follow this muttering miniature gentleman down his rabbit hole, the term has been synonymous with hopeless chases. Those, of course, are what we are often warned against when we are tempted to detour from our intended research objectives.

What we forget, however, is the point of research: to answer questions. To answer questions, we must, by necessity, first have questions that need answers. The dilemma arises when we equate all questions with what some laughingly call Bright Shiny Objects. Following the trail as we chase after potential answers is anything but a diversion: it is our method for bringing us closer to the information we seek.

It may have seemed like a stab in the dark when I went searching for any news reports regarding the several family members I was documenting in Savannah named George Mercer. Admittedly, it is quite possible that totally non-related people could have had the same name as those two brothers. After all, Savannah in 1900 had fifty four thousand people and got nothing but more populated as the decades wore on. Chances were quite good that chasing after a randomly discovered news clipping could mean I had just struck out.

But I had a question which needed an answer: could I find any additional verification that two brothers actually had the same given name as their father? I wanted to know what had become of each of them. Census records—which trail off at 1940 right now—could not provide me any answer to this question. I needed to look at more current documents.

Perhaps the problem erupts when a question, rather than leading straight to an answer, sets off a trail of further questions. But even in a tangled web of questions, we eventually can discern a network of relationships. Thus, the "random" facts of the Mercer surname, the Mercer home, and the Mercer murder all centralized under unifying information—hints like the famous relative named Johnny Mercer, a celebrity unfamiliar to me, engendered yet another question.

I can plunge down those nebulous rabbit holes simply because it is questions which lead me there. And it is the continued volley of questions as I continue to make my way which will keep me from getting ensnared in a totally unrelated issue. The key is to hold close to those questions and that original purpose, and be able to realize when the trail has truly gone cold.

If questions are what drive our research in the first place, we need to have enough faith in our ability to sniff out a good question and differentiate it from an unproductive question. More than that, we need to be able to shift, while in progress, when we discover that our original hunch was not as clear a signal as we had hoped at the first. But we certainly don't need to shy away from questions; they are what can potentially lead us to answers.

Even questions that lead us to dead ends are valuable: they mean we tested a hypothesis and demonstrated that it was not correct. That is also a useful bit of knowledge to document; it saves us from going down that trail a second time. Those who know how to fail correctly are often the first to make it past the finish line of success, as well. A flexible researcher can learn from her mistakes—and put even that benefit to good use.

All told, because of my infinite faith in the value of questions, I fear no rabbit hole. In fact—you may have already guessed this—I thrive on them. If it weren't for those "Bright Shiny Objects," I wouldn't have benefited from many of the outrageous discoveries I have made in pursuing my family's history.

It's okay to ask questions. Give yourself permission to do so, and let them lead you down your next rabbit trail. Whether, in plunging down that rabbit hole, you find the answer you were seeking or gain some valuable insight even through a failed mission, find a way to learn from the experiment, and it will benefit you.


Above: "The White Rabbit," Sir John Tenniel's illustration from The Nursery "Alice," the 1890 publication of Lewis Carroll's Alice's Adventures in Wonderland; image courtesy Wikipedia; in the public domain.


© Copyright 2011 – 2022 by Jacqi Stevens at 2:48:00 AM
Email ThisBlogThis!Share to TwitterShare to FacebookShare to Pinterest
Labels: Reflections on Research