The Trouble With Strategies


When it comes to tackling a research puzzle, it seems helpful to develop a strategy to test any hypothesis. It's essential to have a plan for how to test possible resources or relationships. The caveat, though, is to make sure your research strategy doesn't back you into a corner. Some corners land far from any possible answers. A researcher needs to be able to spot a false lead and know when to abandon those trails which lead nowhere.

In my case, pulling up the baptismal records for children of John Kelly and Johanna Falvey, I wondered whether my research idea was leading me nowhere, indeed. The thought was that, if godparents listed for a child's baptism, in the Irish tradition, were always either siblings of the parents, or their in-laws, one would expect a reciprocating arrangement: you stand in as sponsor for my baby, and I'll do the same for you—or your sibling.

Thus, it would seem reasonable that a researcher could ghost a family tree, just by looking at the sponsors for each baptism listed with the right parents' surnames. Likewise, by seeking any sponsors who were named either John Kelly or Johanna Falvey, it would likewise lead us to candidates for their family trees.

Only problem: of the nine years of baptismal records that I've scoured, so far, in the parish where John and Johanna had two children baptised, I haven't spotted their names showing as sponsors even once. What was up with that? They were present for baptisms in Killeentierna in County Kerry for one daughter's baptism in 1864, and the other in 1867. Did they not take on any community responsibilities even during the three year interval between those two births?

That was when I realized the glitch in my research thinking: I assumed that, back in those "good ol' fashioned" days, our ancestors never moved from town to town. We think they always stayed put in the same village where their grandparents grew up—and their grandparents before them.

That, possibly, is not so. Either that, or I have been tracking the information on two different sets of parents who, coincidentally, have the exact same names—and gave the same name to their daughter.

Here's what got me thinking. Take a look at the column headed "Domicile" in the entries below. 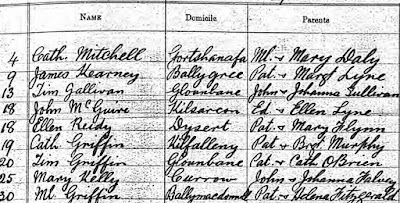 Our John Kelly and Johanna Falvey were listed with their daughter Mary on 25 September 1864 in this list of baptisms. Notice the listing for their domicile: Currow.

Now, fast forward to 1867, when the other Mary is baptised on March 24. One peek at that entry can tell you that the Kelly family did not live in Currow in 1867; they were listed as being from Barnfield.

Currow, I assumed, would be the name of their townland—at least, that is, in 1864. However, looking on this extensive list of townlands in County Kerry, I didn't see any entry for such a name. Nor did I find one for Barnfield—which, to me, sounded suspiciously more English than Irish.

Could it have been possible that our Kelly family had moved from one place to another in that three year interval? Or not even been a member of that parish where their daughter was baptised? Perhaps that was why I didn't see either of the parents' names pop up as sponsors for any other children in the parish.

Though it would seem reasonable to rely first on Irish records for direction on Irish matters, I was reassured when I simply went to Google Maps and entered the term, "Currow, County Kerry, Ireland." There actually was, as it turned out, a place called Currow in County Kerry. 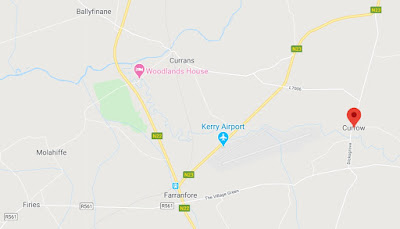 Then, I tried my hand at another familiar resource: I googled that name and found some information on Wikipedia. Currow—at least, according to that resource—is a "rural village" in County Kerry, and apparently contains some townlands of its own. One of those townlands was called by that suspiciously English-sounding name Barnfield—at least during the era of the Tithe Applotment Books.

So, to say the Kelly family lived in Barnfield was simply a way to explain in what part of Currow the family once lived. And Barnfield—plus the surrounding Currow—was part of the Catholic parish of Killeentierna, exactly as the baptismal record showed. Theoretically, then, that meant I wouldn't have to look to another parish to find the remainder of baptismal records for the Kelly children, nor to find John or Johanna listed as a sponsor for their siblings' children. But why weren't they there in the records?

This is where it sometimes becomes necessary to re-evaluate a research strategy to see whether continuing to trudge onward on that same path will yield the answers necessary for the core mission: to construct the family constellation for John's Kelly family and Johanna's Falvey family. I'll keep at it a bit more to see what I can find by turning five to ten more pages of baptismal records, but it will be important to develop an alternate search plan, as well.

After all, we already know from Johanna's obituary many years later, that she had "several sisters" who still lived in County Kerry. Surely, at least one of those sisters had children who should have been listed in that baptismal catalog.
© Copyright 2011 – 2022 by Jacqi Stevens at 2:43:00 AM
Email ThisBlogThis!Share to TwitterShare to FacebookShare to Pinterest
Labels: County Kerry, Falvey, Ireland, Kelly, Maps