As we begin circling the drain on yet another rabbit hole in our attempt to delineate the identities of several men who all claimed the name George Mercer, I realize that the George Mercer IV named in a 1980 news report as a kidnapping victim was likely related to these other George Mercers. It all comes down to the detail in the news clipping naming that George's uncle.

The uncle's name, as given in the news report, was short and easily remembered: Chris Hammond. Yet, as it turned out, his actual given name was one of the longest I had encountered in all my years of family history explorations. Truth be told, when I saw that name mentioned in the kidnapping article, I didn't even recognize the connection. It took a search through my database to realize who it might have been—and to realize that, yes, this unfortunate George Mercer might well have been related to this same Tison descendancy I've been researching.

Let me note here, by the way, that all the names mentioned so far belong to individuals who have long passed away. As we move closer to dates in the present, though, I will leave some details out, in case those individuals are still alive (which I have no way of knowing currently).

So who could this Chris Hammond have been? We first need to keep in mind that numbering names—such as John Smith III—does not automatically imply that the "III" indicates the son of someone with the same name who descended from yet another man with the same name. Sometimes, those numbers do not follow a correlating count of generations, nor do they always imply direct descent.

But for the sake of argument—and to test out a hypothesis—let's just say that our unfortunate George Mercer IV was indeed the son of someone named George Mercer III. In my family tree, I have run into documentation which shows that very detail: a World War II registration card for someone who listed himself as "George Anderson Mercer 3rd."

The card was completed on June 30, 1942, in Savannah, Georgia, in which this George III also declared that his date of birth was in 1924. Note, in this example, his address: "333 East 44th St."  Below that, on the original form, was added the name of the "person who will always know your address." For that answer, George III entered "G. A. Mercer, Jr." I'll let you guess what that "G. A." might have stood for.

Take a moment to check out the details from this certificate. 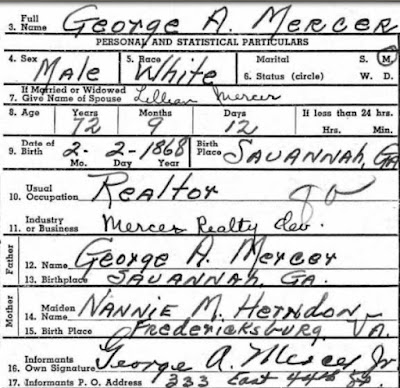 Furthermore, take a look at the informant's address: 333 East 44th Street. Where have we seen that address before? If I've kept my Georges straight, it looks like the informant George would by necessity be George Mercer III.

There are other details which you may have caught in this excerpt from the Mercer death certificate, but we'll save those for another day. For now, we need to move on to that other name—Chris Hammond—and how he connects to the Mercers.

Informant George also had a daughter who was a few years older than that youngest George. She, in turn, married a man by the name of Christopher Cashel Fitzsimmons...wait for it...Hammond.

Thus, Uncle Chris—because you know that this youngest George, brother of the woman who married Chris, had to eventually name a son of his own by that same obligatory name: George Anderson Mercer.

This Uncle Chris was apparently a well-respected man in his own right. When I was first documenting his place as an in-law in this Mercer branch of my Tison/Tyson line, I found some fascinating details regarding his life. Sometimes, a person's path through life leads to pivot points of opportunity, and if someone has the personal fortitude blended with the right skills, that combination can become a springboard upward to success.

That was Chris Hammond's story, judging by the glowing words posted everywhere about him—a tale which I had once considered posting on A Family Tapestry. Introduced at a juncture such as this, how could we not move on to share his story?

We'll save it for tomorrow.


Documents above are excerpts from 1) the U.S. WWII Draft Cards Young Men Collection and 2) the Georgia Deaths Index 1914-1940, both courtesy of Ancestry.com.