Not What I Meant to do Today


I'm ambivalent. After spending time on an unexpected and fun project—which ate up the available hours in my day—I'm still not sure whether what I did was worth the time.

It all started with an accidental discovery. I'm sure you've run across these in your quest to document your family's history. Nothing earth-shattering, you understand. Just unexpected: I found a photo.

When I realized what I had found, I couldn't just keep it to myself; I had to show others in my extended family. As much as I hate to admit it, the fastest way to connect with a lot of my family's cousins is via Facebook. And so, we chatted across the miles, from California to Florida, from Wisconsin to Texas.

I haven't really made up my mind about the usefulness of the photos now included in collections such as Ancestry and MyHeritage. To tell the truth, it becomes rather annoying when I click on a relative's profile on my Ancestry account and see twenty or thirty hints pop up—all high school yearbook photos of great-uncle XYZ's football team, with his face about the size of a pin head. Not very helpful for assessing facial similarities. I mostly click "ignore" and banish them to genealogy oblivion—anywhere else, as long as it is far from my trees.

This time was different. I was in the process of taking the descendants from my father-in-law's tree and migrating them over to the larger tree of my mother-in-law, to facilitate pinning my husband's DNA matches to that one, universal tree. I was in the process of working on the latest-arriving branch of my father-in-law's family, an Irish family by the name of Kelly, who in the late 1860s left the region around the Lakes of Killarney for the rivers converging around Fort Wayne, Indiana.

That Kelly family brought with them three children—a son and two daughters—and added two more sons after their arrival in Fort Wayne. In a tragic (and unbelievable) accident, the Kellys lost their eldest son as a teenager, and a few years later, lost their next child, the daughter who had married a Stevens man who later became my husband's great-grandparents; she died after giving birth to Will Stevens, my husband's grandfather whom I've written about before.

Since making all those research trips back east to extract copies of the original documents—long before Ancestry.com was a thing—I had constructed a fairly reliable pedigree chart of all the family relationships, even to the point of including descendants of each Kelly sibling from that original immigrant family. What I had no idea of, however, was what anyone looked like.

Fast forward...um...a lot of years. I'm still including descendants in my family trees, especially now that I have lots of mystery DNA cousins to connect to that ever-growing tree. And I'm still groaning and deleting, every time I get a hint for an old high school yearbook picture. All of a sudden, while working on the timeline for a son of Catherine Kelly Stevens' brother Patrick, I see something which makes me stop and reconsider.

It was a high school portrait for Patrick's youngest son, Stephan Carle Kelly, but it looked like some other faces I've seen in that extended family—namely, my husband's own cousins. Keep in mind, I've never met this Kelly cousin, nor have any of my husband's close family; Stephan Kelly died in 1951, still in his forties. To the best of my ability, I could not find any children he could call his own, though I could see that he had been married. Though he would have been a cousin to my husband's grandfather, it is unlikely that my husband or any of his cousins would have seen that face to remember it, nor even the face of the next generation. We really have no way of knowing what the Kelly family looked like.

And yet, here was this high school picture. And eyes that belong to some of my husband's own relatives, plus a trademark crooked smile which looks like it belongs to one specific cousin we do know.

The whole experience gave me pause to rethink my assessment of the utility of including yearbook pictures on a genealogy site. This may be the only chance some people have to reconstruct the origin of facial features we see every day on the faces of the family we grew up with. Sometimes, that similarity gets so close, it's almost eerie. 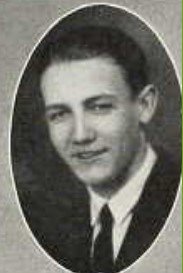 Above: A face from the past which fits eerily into our family's present: Stephan Carle Kelly in Fort Wayne, as pictured in his 1925 Central Catholic High School yearbook; image courtesy Ancestry.com.