Remnants of an Ancestral Story


Luther C. Fischer arrived in 1871 as the firstborn child of widow Sarah Rainey Smith and her second husband, Hartford C. Fischer. Growing up on his father's farm in Coweta County, Georgia, along with his younger sister and two brothers plus his three older half-sisters, one might not imagine Luther's family situation to be one to bestow upon him a fortunate future—especially considering his father's subsequent divorce. And yet, somehow, he found a way toward a better life.

In Georgia about that time arose a new business concern which developed a syrup, or concentrate, which could be sold to drugstore soda fountains to produce a "temperance drink." Somehow, Luther got wind of that business opportunity and began selling the concentrate across the state. He had a motivation for his industriousness: a need to finance his own education.

Even for the times, his education must have cost a sizeable amount. Luther Fischer had enrolled in the Atlanta College of Physicians and Surgeons—eventually known as Emory University School of Medicine—and graduated in 1899. Leaving there—and the part time occupation of selling Coca Cola syrup which financed his education—Luther traveled to Europe to continue with post-graduate studies.

Upon his return to Atlanta, the new Dr. Fischer teamed up with a former professor, Dr. Edward Campbell Davis, to open the Davis-Fischer Sanatorium by 1908, which quickly outgrew its capacity. Inspired by the tragic news of the preventable loss of lives in fires destroying hospitals in Michigan and Montreal, Luther made the decision to change architectural plans for a new sanatorium from the typical wood construction to a building completely constructed of fireproof material. That eighty-five bed facility, though costly, opened its doors in 1911.

By 1931, Luther's business partner Dr. Davis had died, and according to the two men's plans, Dr. Fischer rechartered the sanatorium as a nonprofit institution and renamed it in honor of the (somewhat disputed) originator of the anesthetic use of sulfuric ether, Dr. Crawford W. Long. That institution, in subsequent years, saw its name evolve from the Crawford W. Long Memorial Hospital to the Emory Crawford Long Hospital to, simply, Emory University Hospital Midtown.

What's in a name? Sometimes, we can't really tell, until we learn its history. We learn from history, too, what went into our own genetic makeup, as we discover the personal stories of those whose lives shared the specks of DNA we also find in our own chromosomes. If not for piecing together stories like Luther Fischer's from the scraps of resources cobbled together through a Google search, perhaps not even this might have been discovered.

This, however, was not the story which led me to look closer at Luther Fischer's life. After all, the only time I've been to the state of Georgia has been to fly through its largest airport; I certainly have not had any opportunity to delve into family research there in person. It was only thanks to the kind remembrance shared on a memorial that I learned of another aspect of Luther Fischer's life.

You see, during the rise of his career, Luther also was party to another partnership: that of his marriage to Lucy Jane Hurt in 1900, daughter of Dr. C. D. and Mamie Grant Hurt. Lucy must have meant an awful lot to Luther, though it is only in traces of what was left behind—yet only briefly—that we can see any signs of their care for each other. Thankfully, in preserving that story, others have enabled it to be passed along so we, too, can know it.

I'll share what I've found about Luther and Lucy tomorrow. 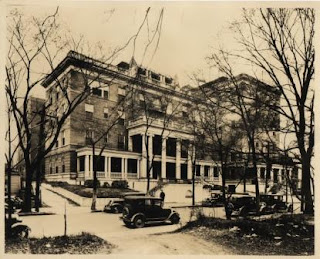 Above: Undated picture of the Davis-Fischer Sanatorium, Atlanta, Georgia, possibly from mid-1920s.