You may think that it's FamilySearch or Ancestry or some other online organization which is the genealogist's best friend in the world, but in some cases, the more generic and readily available websites (think: free) can be a real help.

Case in point: thanks to yet another DNA match I've been working on during this stay-at-home marathon, I found a branch of my father-in-law's tree which needed some sprucing up. Perhaps it was a guilty conscience prompting me to pursue that discovery further. After all, it's been a long time since I last did any work on his tree; it's time to do penance.

I wandered down the branch extending from his Kelly ancestor who settled in western Indiana, prompted by the discovery of the nexus between my husband's DNA and the test results of a fourth cousin. Yep, they are both Kelly descendants.

Along the way, I noticed on my Ancestry.com tree how many hints had been languishing on those Kelly branches. I needed to dispatch them immediately, so I started chipping away at the work. Down the eldest child's branch for as many generations as I could go toward the present I went, adding documentation for each step of the way. And then, on to the next oldest child.

Somewhere in that process, I ran across a missing detail on another Kelly fourth cousin, and decided I needed to find an actual obituary for that person's parents to clarify my records. The mom had left the family home in Indiana years before, with stars in her eyes, heading straight for the Big Apple. Decades later, her life ended at a place called Rye. And yet, the state I had entered was New Hampshire, not the Rye in New York I know.

Confirming that, I abandoned my two newspaper subscription services and moved my search from Wikipedia to Google. There, I entered the exact search terms for the woman I was seeking, plus the year of death and the place name in New Hampshire, not New York.

Success. There were a few hits to choose from—but with an odd twist. The descriptions kept mentioning a second name for this woman, and not just her maiden name. Apparently, when she moved from Indiana to New York, she did get to see some stage lights and hear some applause. That other name was her stage name, and my husband's relative known back home as Helen Marie Fulk turned out to be radio vocalist Helen Carroll.

Hmmm...if that was so, would Wikipedia have anything more to say about this woman? With a click of a mouse, I raced back to that go-to site to see—and yes, Helen Carroll and The Satisfiers were indeed an item during the post-war years in New York City. Another trip to Google showed me the way to find her entry on IMDb.

For those who are not used to jumping on the computer to find answers to the stuff they're wondering about, this may not seem a natural process. Admittedly, I had to learn to develop the habit, myself. But the more I delve into the breadth of the history of the individuals in my family trees, the more I want to fill in those blanks with information.

Online resources like the many newspapers which can be accessed for free or public domain books from the previous century are great ways to gain both specific details as well as background information on the time period or locale of the ancestors we are researching. But don't forget the most obvious resource of all: the world of information that can be at our fingertips, if we use Google as the key to open that door. 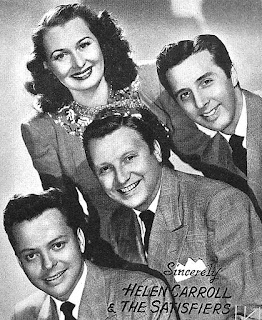 Above: Photograph of the group, Helen Carroll and The Satisfiers, from the 1948 cover to sheet music for "Toolie Oolie Doolie" published by Charles K. Harris Music Publishing Company; copyright not renewed; in the public domain; courtesy Wikipedia.
© Copyright 2011 – 2022 by Jacqi Stevens at 2:48:00 AM
Email ThisBlogThis!Share to TwitterShare to FacebookShare to Pinterest
Labels: Carroll, DNA Testing, Fulk, Kelly, Online Resources