Today may be Easter, but it doesn't seem quite the same as we've come to expect. No sunrise Resurrection Service (for those who actually know how to witness the sun rise in person). No church celebrations at all—not, at least, in person in a church building. No Easter Egg hunts for the children. No picnics in the park. And certainly no reason to get all dressed up—there is no place to go.

Out of desperation, I did find somewhere to go yesterday. Oddly enough, around here, hardware stores are considered just as "essential" a service as grocery stores. For those familiar with the evolution of hardware stores over the decades, that means I can go to a hardware store to splurge and assuage my social-deprivation mood swings with colorful flowers. Hardly an "essential" need, but tell that to my color-starved eyes.

Standing at the requisite six-foot distance in a line which wrapped its way around the front facade of one of those big box stores, I waited for the door bouncer to scientifically balance the one-shopper-in-per-one-shopper-out and admit me into a place where, nonetheless, it was so crowded that it was physically impossible to steer clear of another human being's six foot bubble. Where did all those people come from?

Breaking loose of the pack of shoppers who really did come for those essential hardware items, I made a beeline for the garden center, and loaded up my cart with divine color—perennials all, mind you, as an added precaution, should this quarantine do us a number through an entire growing season. Just in case. I'm talking about a desperate woman here.

Now, back safely at home, all those lovely blooms are brightening the isolation, neatly ensconced in pots around my deck, where I can soak in the view even from my work station inside. While I didn't snag any traditional Easter lilies, I did indulge in several variations of that royal color, purple, to remind me of the meaning behind the season.

Hopefully, at some point in the near future, we will all be able to get back together again with the people who mean so much to us. I miss my friends, family, and even associates so much, I almost could go out and hug a stranger—but I promise to restrain myself, at least until we're clear of the health risks. Perhaps at that point, it will feel more like Easter. 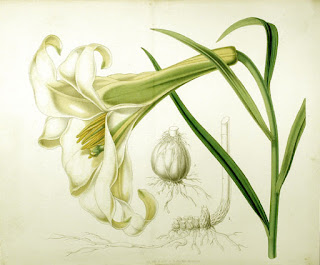 Above: An 1850 lithograph of lilium wallichianum, an Asian species of lily native to India; from the horticulture journal Flore des Serres et de Jardins de l'Europe, published from 1845 through 1888. If you are as color-starved as I am, you may access the entire collection of lithographs from that journal series by clicking here. Image now courtesy Wikipedia; in the public domain.
© Copyright 2011 – 2022 by Jacqi Stevens at 2:50:00 AM
Email ThisBlogThis!Share to TwitterShare to FacebookShare to Pinterest
Labels: A Process Break, Holidays and Genealogy