When I first realized it was a surname like Miller that I'd be researching, I thought I might as well give up before I started. There are just so many Millers out there....

I was concerned, when considering researching all of the relatives mentioned in Tally Simpson's letters home during the Civil War, that tackling the surname of his most beloved aunt and uncle—Henry Campbell and Caroline Taliaferro Miller—would cause some research problems. There are, after all, so many Millers out there. Even narrowing the parameters down to just those Millers in South Carolina in the 1860s, I might find more Henry Millers than I cared to pursue.

But Caroline Virginia Taliaferro—Tally's aunt and confidante—did leave enough clues to help me find her in many places other than in the collection of family letters in Far, Far From Home. While revisiting her profile in my genealogy database, I realized that this was the youngest of the four Taliaferro daughters for whom it had been said that one of her suitors was the ill-fated Turner Bynum. It was he who lost his life in a duel with the future governor of South Carolina, Benjamin Perry.

That tragic loss in 1832 followed a year after Caroline lost her own father, Zachariah Taliaferro, when she was only nineteen. Though she had many suitors over the next decade, she didn't marry until she was in her early thirties, and her choice for a husband, though a doctor, may have surprised some, as he was said to have been a quiet type, unlike some of the other notables.

Caroline Virginia Taliaferro and her husband, Henry Campbell Miller—"Uncle Miller," as Tally Simpson called him—had at least four children before Dr. Miller's passing in 1899. Though Tally was not there to know this about his closest cousin, Henry and Caroline lost their son, Harry, in the war a little over a year after Tally's own death. A note on his company muster roll explained, "Killed in action near Strasburg VA Oct 19, '64."

Left after the war was Harry's younger brother, George Watt Miller—whom Tally referred to in his letters as "Watt"—and Watt's sisters Caroline and Resaca. In Tally's letters, he referred to these cousins as Carrie and Ressie. Only the daughters remained, after their father's passing in 1899, which may explain the legend on Dr. Miller's headstone, "Erected by his daughters." Their mother, Tally's Aunt Caroline, had been long gone by that point, having passed in 1877.

Just before her father's passing, Tally's cousin Ressie married a widower, John Hook. After her husband's passing in 1918, Ressie returned to her hometown of Pendleton, where she remained until her death in 1932. She apparently had no children of her own.

Tally's co-conspirator in the plot to woo "The Fair Unknown," his cousin Carrie, eventually married William Wragg Simons in 1875, but like her sister, apparently never had any children. The only one of Tally's cousins in the Miller family to have descendants was the youngest, Watt, who, before his early death in 1890, married Edith Ellen Walker in 1871 and had at least five children.

Maybe some day—if not already—one of those descendants will stumble upon Watt's daughter Dorothy Miller Massey's entry in a D.A.R. lineage book and learn of her Taliaferro roots in colonial Virginia. Hopefully, one of those descendants will also get to read the letters of Watt's sister to her cousin Tally during the Civil War, and catch a glimpse of what that teenaged Carrie was like, long before nieces and nephews were even there to know the proper Southern lady.

After all, a name like Miller might be commonplace, but the personalities which come out in these brief glimpses are anything but mundane. Thankfully, someone cared enough, through the generations, to preserve these vignettes in the form of family letters during a stressful time in our nation's history. 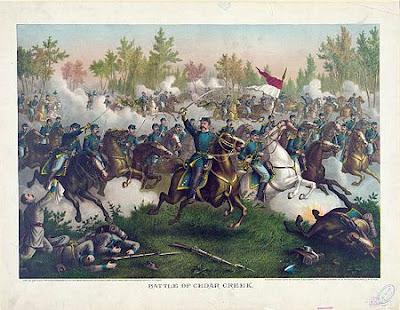 Above: "Battle of Cedar Creek," chromolithograph by Kurz and Allison published circa 1890, depicts the battle near Strasburg, Virginia, in which Tally Simpson's cousin, Harry Miller, likely was killed in action. Image courtesy U.S. Library of Congress Prints and Photographs Division, via Wikipedia; in the public domain.
© Copyright 2011 – 2021 by Jacqi Stevens at 2:46:00 AM