Paris:
Everybody Nearly Yelled Their Heads Off 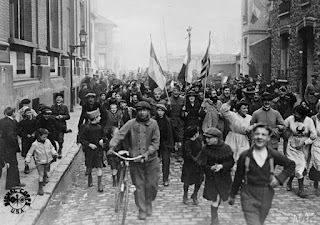 It was November of 1918. Sometime on that eleventh day of that eleventh month, word got out to the city of Paris that the war to end all wars had, at long last, ended. Someone from the United States Army Signal Corps grabbed a camera, ran out to the street where the commotion arose and snapped a picture. The result bore the exuberance of the moment in its caption:


Paris. Everybody nearly yelled their heads off an Armistice Day in Paris, November 11th, 1918. Here they are, children and grownups, singing the Marseillaise, marching about the streets.


One year later—exactly one hundred years ago, today—then-President Woodrow Wilson captured what he felt the day meant in an address to his fellow Americans. In establishing the first Armistice Day in the United States that year, the president saw the day as one "filled with solemn pride in the heroism of those who died in the country's service, and with gratitude for the victory."

Armistice Day—like the cessation of war it was acknowledging—was not merely a commemoration in the United States, but one with international recognition. The first event, one hundred years ago, was held at Buckingham Palace on the eve of that first anniversary. Likewise, the entire British Commonwealth marked the day, one hundred years ago—no surprise to learn, considering the great price paid by subjects of the crown's far-reaching dominion—though later calling the designation Remembrance Day.

Today, the "Remembrance Poppy" is still a symbol of the aftermath of that conflict, calling to mind the poem by Canadian physician, Lieutenant-Colonel John McCrae, "In Flanders Field," and the tiny red icon utilized by Madame E. Guérin in her humanitarian efforts following the war. From its start in France, the tiny red poppy's symbolism spread to the United Kingdom, Canada, Australia, and New Zealand, as well as to the United States.

While Americans now recognize the service of all veterans on this day—which we now refer to as Veterans Day—its designation is rooted in a commemoration established one hundred years ago, long before most of us were even born. Gone are not only those who fought in that first Great War, but many of the veterans of the second World War which followed so closely on its heels. The visceral responses triggered by remembering the atrocities of that first war are no longer part of our collective consciousness, and so, perhaps, is the personal connection to the significance of this holiday.

And yet, so many of us do know men and women who, over the generations, served our nation in the armed forces—many of them members of our own families—and for this fitting recognition, we still need to acknowledge their sacrifices, with thanks for what they have done on our behalf.

Email ThisBlogThis!Share to TwitterShare to FacebookShare to Pinterest
Labels: Holidays and Genealogy, Wars