I realize I missed an opportunity to say something last Thursday about an important date in American history. I actually didn't realize it until preparing final notes for our local genealogical society's meeting that same evening, long after posting the day's entry here at A Family Tapestry.

I've adopted a new tradition for our society meetings, ever since last month, when one of our members wrote an article for our group's newsletter. The article was about the 1989 San Francisco earthquake, the one that shook things up for us, right before the start of the game three of the World Series. It just so happened that our October society meeting started thirty years and forty one minutes after the Loma Prieta earthquake began. And of course, once I mentioned that fact, the room erupted, with everyone remembering where they were at exactly that time, thirty years ago.

With a reaction like that, I decided to start every month's meeting with a few tidbits of "on this date" remembrances. November's entry, for our meeting on the 21st, began with a note about another significant anniversary: on this date in 1620—which, according to the Gregorian calendar which we now use, would be November 21—the male passengers on the ship, the Mayflower, signed a document which we now call the Mayflower Compact.

That means, for us at the end of 2019, we will soon approach the four hundredth anniversary of the Mayflower's arrival in the New World. For those of us descended from any of the passengers aboard that ship, that four hundredth anniversary of their arrival would be a special time, indeed, to officially be included in the membership rolls of the General Society of Mayflower Descendants.

This, you might have noticed if you have been reading along at A Family Tapestry for a few years, has been one of my long-standing goals. Only, instead of talking about that research goal, as I have done in past years, I need to get going on that project if I hope to make it a reality in that special anniversary year.

Granted, that goal will dovetail nicely with the goal I have for preparing for my colonial Virginia class at the Salt Lake Institute of Genealogy this January, for it is the very same migrating ancestors I'll be researching in Virginia whose roots trace all the way back to two passengers on the Mayflower. In fact, it is on account of the very location at which these wandering ancestors lose me in Virginia that I am taking the SLIG class: I hope to find my way back from the backwoods of Virginia to the landing place for Plymouth Colony to establish my claim to membership in the Mayflower Society.

Of course, it would be nice to receive that designation on the event of the Society's four hundredth anniversary, but if I hope to do that, I'll need to get busy on that application project now. I suspect I'll have plenty of company with the others who are realizing the same thing about the approaching year. 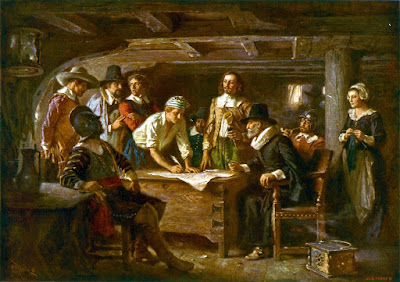