Party's Over;
Now, Back to Work!


Conferences and other learning opportunities—and chances to socialize with other genies—may shift my mind into overdrive, but there comes a time when all the fun and festivities must give way to more serious work. So, I set aside my many musings and return to some unfinished business: who on earth those people were who were my paternal grandfather's ancestors.

You may remember my many groans over this near-impossible line to trace. I recapped my many trials and tribulations in a post at the beginning of this summer. I've also partied over the discovery of several recently-appearing DNA matches, all of whose family trees contained the same exact surname: Michalski. But today, as I pick up the research trail again, I want to focus on one detail which I had glossed over in my previous excitement to find at least one glimmer of hope, after all these years of finding nothing: a census record which I had thought contained a mistake. Now I'm thinking, maybe that wasn't a mistake.

The census was from the 1905 New York State enumeration. It showed a household in Brooklyn which included my paternal grandmother's two brothers and their parents. It also included my grandmother, by then recently married, and her husband and newborn son.

It's the name of Sophie Laskowska's husband, as it is shown in this particular census, which I want to focus on today. Remember, this is the man who supposedly changed his name from something Polish to the name all of us—my older siblings and my cousins—remember him by.

From the discoveries starting with a cousin's research, years ago, we had figured that his very Irish-sounding name was a self-made invention, and that his real name was Americanized to be Theodore J. Puchalski—or, losing even the "ch" sound in German or eastern European phonics, a surname spelled Puhalski. After all, that's the way I found him listed in the 1910 census.

But that was Theodore Puhalski—the name I had decided to stick with, once I found it in the 1910 census—and the 1905 enumeration didn't have it quite that way. The odd thing was, the first name had been somehow corrected in that census, in a smaller hand, to show as Thomas, not Theodore—why, I wasn't sure. I had also written off the surname spelling as a case of an impatient American enumerator not willing to put up with the accent of foreigners during his duties, and just spelling what he heard as quickly as possible to be done with this stop and move on to the next.

Puhalski or Puhalaski? That was the case that I arbitrarily brushed off as operator error. But maybe it just wasn't so. Now that I have these several DNA matches which contain the same surname—Michalski—I am seeing a potential other surname which may be similar to that of a woman who was tangentially connected to a part of my grandfather's circle in New York. That surname, much like the case of Puhalski versus Puhalaski, was similar to the aberrations of surname of this woman in New York. It just so happened that there was a woman back in Poland—in the same village as these Michalski connections—who married a man with a surname almost like Puchalski...but not quite.

Now I'm thinking it would be a good time to go back and see if I can find that Polish marriage record that I—crazy me—had discarded out of hand, the first time I saw it. Maybe this New York State enumerator didn't get that surname spelling wrong, after all. I'll need to see if I can go back and take a second look. 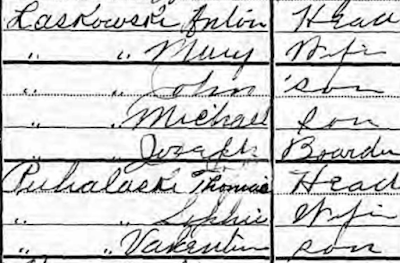 Above: Excerpt from the 1905 New York State census for the Brooklyn household of Thomas and Sophie Puhalaski; image courtesy Ancestry.com.
© Copyright 2011 – 2022 by Jacqi Stevens at 2:47:00 AM
Email ThisBlogThis!Share to TwitterShare to FacebookShare to Pinterest
Labels: DNA Testing, Laskowski, Michalski, New York, Poland, Puchalski/Puhalski