How to Mangle History


There I was, minding my own historical business, when I unexpectedly found myself sucked into a mess concerning someone else's family history. How does this happen?

The object of my pursuit was a man whose surname is well known in the city just to the north of my rural home. It turns out that someone bearing that same surname—and living in that location in its formative years—popped up in my research concerning another family in town here. (Full disclosure: this man became husband of the sister of my research subject.)

The man's name, as we saw yesterday, was John Hutchins, a Canadian who traveled to California just after the peak years of the Gold Rush. A 1923 history of the county in which he settled gave a glowing account of John Hutchins' integral involvement in the foundation of the settlement destined to become the city of Lodi. Even his Find A Grave memorial picked up details from that Tinkham biography.

Trouble is, there are some other reports which, while providing a similar story line, include names of men other than John Hutchins in their account. Worse, there are other timelines and accounts which omit any details at all of how John Hutchins could be considered a city father.

True, one of those accounts may not be considered academically noteworthy—the Wikipedia entry on the history of Lodi—but I find it odd that, even in the Tinkham volume, there are two different accounts about how Hutchins' adopted hometown got started.

According to the Tinkham biography of Hutchins,


With four associates, he [John Hutchins] bought the site of the present town of Lodi, and these five men in association founded the place. He also induced the Southern Pacific Railroad to build its line through the town, and then he laid out the town and sold lots.


In 1869, the Central Pacific Railroad was in the process of creating a new route, and pioneer settlers Ezekiel Lawrence, Reuben Wardrobe, A.C. Ayers and John Magley offered a townsite of 160 acres...to the railroad as an incentive to build a station there.


Already, I'm spotting details which concern me about accuracy. In addition to the absence of Hutchins' name in the second account, the fact that Tinkham lists the Southern Pacific Railroad as the target of Hutchins' lobbying efforts is a problem. If you look at a map of the area, drawn up in 1895, years after the 1869 discussion about selecting a route, you will notice the two railroad lines which cross the downtown area of Lodi were the east-west route known then as the San Joaquin and Sierra Nevada Rail Road, and the north-south route of the Central Pacific Rail Road.

Granted, following the histories of each of these railroad entities, we do see that the San Joaquin and Sierra Nevada was swallowed up into the Northern Railway Company in 1888—which in turn was consolidated into the Southern Pacific in 1898.

The Central Pacific line experienced a similar fate, becoming a line leased to the Southern Pacific Railroad in 1885. Despite that technicality, the county's official map for 1895 designated the line as part of the Central Pacific network.

While those details about names may give a researcher pause, the absence of mention of John Hutchins in one account, and of the other four men in the other accounts also makes me wonder. I looked for any other resource which might provide an explanation. While this search showed me that there are several organizations interested in including a summary of Lodi's history on their websites, it also provided me with some additional tweaks to the narrative.

For instance, a timeline of the city's history, appearing in this document on pages 21 through 26, only mentions the name Hutchins when speaking of the street name, or the property used to establish their high school. The first merchants in town, the first newspaper publishers, the first bankers and politicians were mentioned by name—but not John Hutchins.

More concerning was this discovery of a rewording of the narrative, provided by the city's downtown business alliance:


Settled by local families in 1859, the town of Mokelumne, now called Lodi was born. It was just a local farming town until the Central Pacific Railroad brought pioneer settlers Ezekiel Lawrence, Reuben Wardrobe, A. C. Ayers and John Magley to build a railroad through the middle of town.


Now, not only were the four men we had already seen mentioned in the Wikipedia article listed again—and in the same order—but now they were instruments of the railroad company, there at the company's bidding to build the railroad.

One hundred years from now, whose version will win out as what "really" happened? With just the slightest changes, the story morphs from one aspect to another. And in one case, a key person was either omitted entirely, or inserted into the record when he shouldn't have been there at all. Which way is it?

Of course, just as we've learned in handling our own family history research, we need to go back to source documents to see what the paper trail actually shows us—hoping, at least, that the documents were drawn up correctly and the dates indicate the actual time of occurrence. And that's what I want to do, concerning my original question about John Hutchins.

Just out of curiosity, though, I want to pursue more information on each of these other gentlemen. Could reports about each of them allow us a glimpse of their own lives—and possibly explain their connection (or lack thereof) with that John Hutchins of the glowing reputation? Let's take a look at each one to see what we can find. 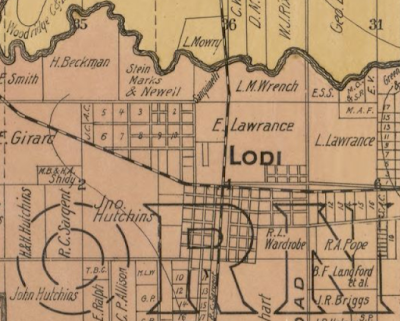 Above: Excerpt from the Map of the County of San Joaquin, dated 1895, as currently found at the United States Library of Congress, showing the properties of E. Lawrance, R. L. Wardrobe, and John Hutchins close to the downtown area of Lodi, California; courtesy Library of Congress Geography and Map Division; in the public domain.

© Copyright 2011 – 2022 by Jacqi Stevens at 2:48:00 AM
Email ThisBlogThis!Share to TwitterShare to FacebookShare to Pinterest
Labels: California, Hutchins