Building Castles in the Air


You may have heard the advice against building castles in the air. Today, we'll consider the wisdom of building family trees in the air. It may turn out to be attached to the same sage warning, but I'm still tempted to explore the possibilities.

Here's the situation. I've received word that there are six DNA matches, all of whom contain the surname Michalski with an ancestral connection to a woman with a maiden name so similar to one in my mystery grandfather's roots—Zegar—as to present too tempting a connection to ignore. All these DNA-match families lead back, in the late 1800s, to a tiny village in Poland called Czarnylas. And records for these few hundred souls—baptismal, marriage, and death—happen to have their transcriptions resident in one freely-accessible website hosted by a group known, in English, as the Pomeranian Genealogical Association.

Granted, a lot could go wrong, relying solely upon transcriptions of handwritten records. The handwriting could be read incorrectly. Or copied carelessly. Or transposed with half the information from the next record in the set. Without being able to see the documents for myself, I can't really be sure all the information was transcribed accurately. Or that the information given is all that was provided—there might be even more notes that could further help my research, if only I could see them.

But hey, there it was: a treasure trove of data from a tiny village which even now has less than five hundred people. What are my chances that I'd pick the wrong Paulina Zegarska married to Andreas Czechowski? We're surely not talking the Polish equivalent of Smith here.

So I took my chances. I started first with what I knew, and looked up Walerya and her older sister Weronika, the Czechowska sisters who married Michalski men before immigrating to Milwaukee, Wisconsin. There they were: the transcriptions, at least, for Weronika's marriage in 1878, and Walerya's in 1886.

From there, I decided to push my way backwards in time. I looked for baptismal records for the two Czechowska sisters by targeting my search to Czarnylas only, and selected a reasonable but wide date range. Since Polish tradition dictated that women's surnames which end in -ska would be connected with fathers whose names were the familiar -ski suffix we associate with that ethnicity, I knew I'd be looking for records for a father whose surname was Czechowski.

And the search was on. I was ready for this process of elimination. First, I confirmed the dates of baptism for the sisters—1857 and 1870, respectively—and then took in the names of their parents. That's how I discovered their mother's maiden name of Zegarska.

Along the way, I noticed how many siblings the two Czechowska girls had, and realized I may someday need this information, organized into a family tree format. And so, I began...

Eventually, I got the brainy idea to correlate the baptismal information on this one section of the website with marriage information from another part of the search feature. But something got in the way of my brainy idea: it seemed each of the Czechowska girls were getting married at incredibly young ages. What was going on here? Was this a listing of betrothals, rather than actual marriages?

It dawned on me at that point that, like those of so many other ethnicities I've researched, Polish families might have also followed that tradition of naming their babies after their older relatives. Could there have been a previous generation busily naming their daughters these same names?

This required a repetition of the birth records search, and another round of adding records to my family-tree-in-the-air. I augmented this when I got the brainy idea to branch out and look for that Zegarska surname in the same way—look for the dad in baptismal records by entering his surname as Zegarski.

At the feverish pace I've kept up this week, I've added a considerable amount of names of Polish people from the early 1800s onward—all people I don't even know. My family-tree-in-the-air takes on the appearance of a pole, firmly anchored in Milwaukee Michalskis, then rising up three more generations with nary a branch, until it becomes a hairy mess of Czechowskis and Zegarskis in the tiny town of Czarnylas. All I needed now was a genealogical Jack-in-the-Beanstalk to come chop down my tree, and the whole ancestral mess in the clouds would come crashing to the ground.

Vulnerable, yes—to all sorts of errors. I'm not sure I could advise such a process. But I just couldn't help myself. The information was there and, well, information is always best comprehended in an organized format. I may have all those Czarnylas Czechowskis and Zegarskis organized, alright, but I can't yet vouch for any of them being related to me. Perhaps it is best that I've made that tree-in-the-air a private and unsearchable tree. For now, it's my private genealogical sandbox while I explore what patterns and information emerge—if there will be any at all. 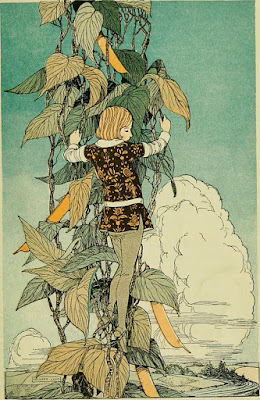 Above: Illustration of Jack climbing the Beanstalk, from the 1922 book Journeys Through Bookland; courtesy Internet Archive via Wikipedia; illustration in the public domain.
© Copyright 2011 – 2022 by Jacqi Stevens at 2:47:00 AM
Email ThisBlogThis!Share to TwitterShare to FacebookShare to Pinterest
Labels: Czechorski/Czechowski, Michalski, Online Resources, Poland, Zegarski