A Canadian Goes to California


"Not many among the highly honored pioneers of San Joaquin County could boast a more enviable record, or a more interesting history," said George H. Tinkham in his 1923 History of San Joaquin County of one of the supposed "honored founders" of the "town" of Lodi, California. Yet, though the man's surname is still affixed to both a major street and the original high school in the city, perhaps the Tinkham entry on John Hutchins should be recognized more as an exhibit of the flowery prose of the era than an accurate representation of history.

According to the Tinkham biography, this founder of a city in northern California originated in Canada, traveling west across "the great plains" in 1853. First stop—for almost everyone heading west to California in that time frame—was to "the mines." Whether his first venture upon arrival in the Golden State was successful, this biographer doesn't say outright, but infers that after that stop, John Hutchins arrived in Lodi.


With four associates, he bought the site of the present town of Lodi, and these five men in association founded the place. He also induced the Southern Pacific Railroad to build its line through the town, and then he laid out the town and sold lots.


The Tinkham report details the location of the parcels John Hutchins purchased, and though there is no date given for these transactions, a map of the county in 1895 seems to indicate the then-current location of the properties to be approximate to the streets mentioned in the Tinkham history.

The only problem with the Tinkham report is that another version can easily be found online—a similar story about "inducing" the Southern Pacific Railroad to plan its route through the fledgling town, yet omitting the Hutchins name entirely.

I suppose I wouldn't have cared much about such details—or even noticed the discrepancy at all—had I not stumbled upon the name of this John Hutchins while working on the history of pioneer settlers of our county for our local genealogical society. That surname, however, figures quite prominently in that particular city, causing me to wonder not only about the connection to the pioneer settlers I was researching—actually, an entirely different family which turned out to be related by marriage to a John Hutchins of Lodi—but to the nexus between this particular individual and the street and building bearing that surname, as well. 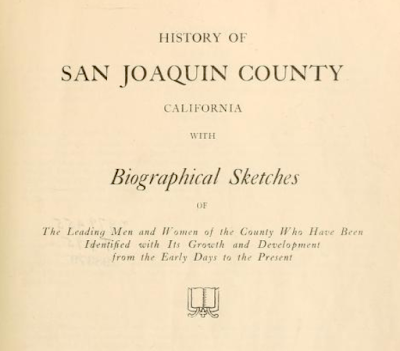