Don't Think This One Will be Easy


So we find this hundred year old photo of an adorable, chubby-cheeked angel, and all it says on the back of the cabinet card is "Compliments of Hazel." The only other clue we have to go on is the studio imprint advertising the Finch photography services in Aberdeen, Washington.

Fortunately, we discover that Aberdeen, before the turn of the century—well, at least that century—had a population of less than four thousand people.

It would have been nice if Hazel's doting mother had at least indicated a surname, or signed her own name to her note, or, well, something. But she didn't, which leaves the question: with only a first name and a town name, can we find the right Hazel in the midst of four thousand people?

It all comes down to a guessing game. With multiple questions. What year was the picture taken? How old does Hazel look in this photograph? When was the studio in business?

Progressing through this guessing game turns out to have some tricky hidden roadblocks. For instance, though we can avail ourselves of guides for dating cabinet cards—the type of card stock used for this photograph—sometimes the details in the guides can leave an unsuspecting soul more puzzled afterwards than at the start.

Even if the plan was to approximate the date of the photo, subtract the subject's age from that to arrive at a birth year, then search the census records, the process is not so easily streamlined.

As it turns out, Aberdeen—currently located within the county of Gray's Harbor—was not always part of a county by this name. The county name had been changed from Chehalis by the state legislature in 1915 to differentiate it from the city by the same name, which was located in a different county entirely. Any governmental records used in our search for Hazel would be located under the county of Chehalis, not Gray's Harbor.

Yet another detail could cause a problem in our search. If Hazel's photograph were taken in the mid 1880s—perhaps indicating a birth year which could gain her an entry in the 1880 census—there was no 1880 census for the people of Aberdeen. Washington state was not admitted to the union until 1889. With no 1890 census to consult, the next time we'd be able to find Hazel might not be until the 1900 census.

Except for one thing: the detail causing us to not have access to the census records for the good people of Aberdeen in 1880 is the very reason we can access her name—hopefully—in territorial records shortly after that point. For the county of Chehalis, those territorial dates include the census taken in 1885, which might be more to the point of our search for Hazel.

While I am no expert in dating photographs, my guess is that, with the simplicity of the border for this card, it was an earlier iteration of the many variations in which such cabinet cards were issued. For a working hypothesis, we can start with the estimate that the photo was taken in 1885 and that Hazel might have been four or five years of age, perhaps even younger.

The only problem, though, is that the Ancestry collection holding that 1885 territorial census for Aberdeen also contains several other local census enumerations. Furthermore, it doesn't appear that the search can be as finely tuned as we can do for a regular census—in other words, the search results will tell me that the person in question lived in Washington, but not that she lived in Aberdeen. That would not be a problem if the universe of possibilities in that search result was twenty or less—thirty, even. But 180? Now, that's starting to edge into "exhaustive." 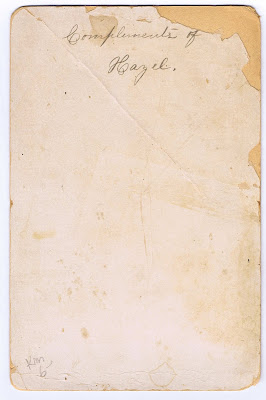