There are a couple more photographs remaining from the stash I brought home from my foray into the foothills of northern California last fall. Most of those photos I found on that trip have now been reunited with descendants of the picture's subject, just as planned. Some, though, have yet to find their way home.

Depending on how well I guessed the rarity of names—or name combinations, in some cases—for a given location, the photograph which I found abandoned in an antique store up in Gold Country could be successfully reunited with family. These last two photos, though, were not my best guesses.

The photo I'm sharing today was a darling one, so I guess I can argue, "Who could walk away from this one?" Besides, in my defense, the photo did provide a first name. And a location—a place I was sure couldn't have boasted a large population back one hundred years ago.

As it turns out, though, Hazel was a more popular name than the status I pegged it as. Of course, I still need to estimate the date of the photograph, thus allowing me to ballpark the year of Hazel's birth.

For sake of argument, though, let's assume Hazel was born in the decade beginning with the year 1880. During that decade, at least in the United States, thirty six hundred baby girls were bestowed with the first name Hazel, earning it the rank of eighty-fourth out of the top two hundred baby names from 1880 through 1889.

Perhaps, with a rank like that, I might have a chance of figuring out just which Hazel was which in the city of Aberdeen, Washington. After all, at that point, Aberdeen would only have been a tiny town, since it wasn't established until 1884.

By the time Aberdeen was officially incorporated as a city in 1890, the popularity of the name Hazel had shot up to twenty third place. With an estimated twenty thousand baby girls bestowed with that name between 1890 and 1899, my chances of finding just the right cherub diminished greatly. Still, I'd be looking for Hazel in a city of only 1,638 people. This couldn't be too hard, could it?

Right. A quick search on Ancestry.com for people born in the county containing Aberdeen, anywhere between the years 1880 and 1900, yielded ten family trees with potential candidates for our Hazel. None of them, incidentally, happened to include a photograph of their Hazel.

On the off chance that anyone researching their ancestors might include a Hazel born in—or living near—Aberdeen, Washington, I'll share her darling (albeit tattered) photograph here. Who knows? Crowdsourcing may lead us to a connection for this poor orphaned photo yet. 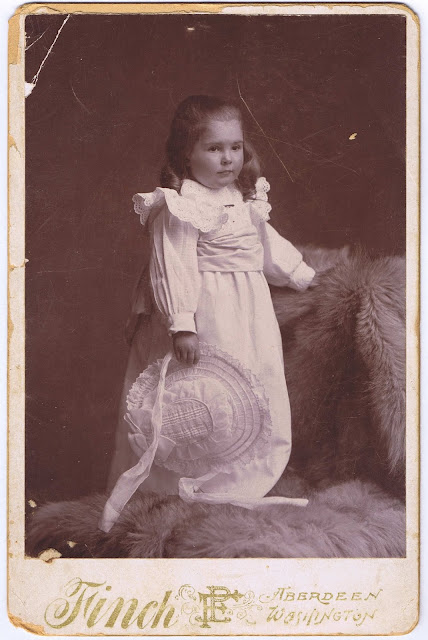 Above: Photograph from the Finch photography studio of Aberdeen, Washington, labeled on the reverse simply, "Compliments of Hazel." Photograph currently in the possession of the author pending return to family members.
© Copyright 2011 – 2021 by Jacqi Stevens at 2:55:00 AM