What can be said about baby pictures? They may be cute, or sweet, or look oh, so cuddly. But one thing is sure: as far as the adoring parents are concerned—well, at least for the first one—that child is the only child in the universe. No one else can even come close to comparing.

That's probably how the parents of Baby Fay felt—or at least her doting mother, when she wrote that hundred year old postcard to Mrs. Henry Keefe in Red House, Nevada. "We think she is the only babe," gushed Baby Fay's mother at the end of her tightly-packed note on that tiny postcard-sized writing space.

As for the details, the undated card mentioned that Baby Fay was five weeks and two days old at the time the picture was taken. But such are mere facts. The important details this mother wanted Mrs. Keefe to know were that "She is awfully cute now. She laughs and plays and tryes awfully hard to talk."

Fortunately, this young mother included some additional facts to help determine just who Baby Fay might have been. She labeled the front of the Azo picture postcard with the baby's name "and mother." Thankfully, on the reverse, using nearly every space available to write, this mother included her own name, plus the fact that the card was coming from Bandon, Oregon.

And with just those few details, once again, we're off to explore what can be found about another abandoned family photograph—and hopefully see this one through the process all the way to a return trip home to a descendant who would welcome receiving it. 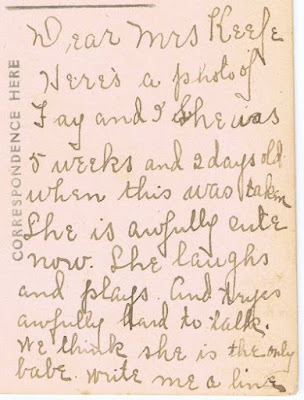 Above: Message from the reverse of an undated Azo postcard addressed to a Mrs. Henry Keefe of Red House, Nevada.

© Copyright 2011 – 2022 by Jacqi Stevens at 2:52:00 AM
Email ThisBlogThis!Share to TwitterShare to FacebookShare to Pinterest
Labels: Nevada, Postcards