One might have thought, in finding a 1917 photograph of a baby and her mother labeled from Bandon, Oregon, that the family could have been located there in the very next census.

Apparently, Hallie Randall and her adorable infant Fayetta Mae were not in Oregon for long. I found them in the 1920 census, living in San Francisco, along with Hallie's husband, Charles. I couldn't, however, make out Charles' occupation—nor his age or address, for that matter, both entries having been muddied by strike-outs and overwritten—so I needed to turn to other resources for clarification.

One would think, having appeared in the 1920 census, that an identical entry in the local city directory would reflect the proper address. But, no; the San Francisco city directory for 1920 showed a dentist by that name living on Pierce Street, and another man with the same name—though coupled with a wife named Hazel, not Hallie—living on Hayes. Nothing looked similar to the overwritten entries on the census for street name or occupation.

Perhaps our Randall family was new to town and had arrived after the directory was published for the year. I gave them the benefit of the doubt and looked up their name in the 1921 directory. Still no likely entry, making me begin to lose faith in the governmental enumeration system.

Or perhaps the Randalls just left town before the next directory could be published.

Best I could tell from attempts to decipher the census record, Charles and Hallie—and, of course, their adorable baby Fay—lived in a neighborhood bordered by Fulton and Fillmore, the two street names I was able to read on their census page. Being ever grateful for the instant accessibility to almost everything in our currently connected cyberworld, I learned from Google maps that the likely two missing street names on the census page were McAllister and Steiner. 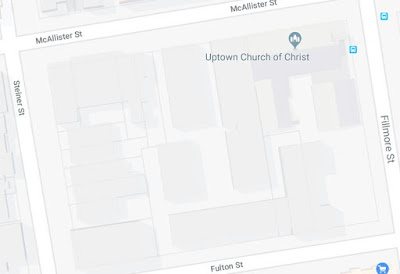 With that, I confirmed that those city directories—if, at least, they got the addresses correct—did not include our Charles and Hallie Randall.

So, where did they go? In Oregon in 1917 and California in 1920, what was next? Thankfully, a transcription of a marriage record, along with information gleaned from the subsequent census, showed a family which had traveled full circle from where they first became man and wife. The Randalls' next stop in life was Nevada, not far from the address Hallie had entered on that 1917 postcard featuring her darling baby.


Above: Map of the Randalls' San Francisco neighborhood  at the time of the 1920 census; map courtesy Google Maps.
© Copyright 2011 – 2022 by Jacqi Stevens at 2:47:00 AM
Email ThisBlogThis!Share to TwitterShare to FacebookShare to Pinterest
Labels: California, Family Photos, Maps, Oregon, Randall