So many times, as we research the lives of the women in our ancestry, we find nearly a blank slate. To find the answers to our questions about the basic details of a woman's life, it is sometimes easier to glean the details from a male relative's records. Such was the case with the older sister of Alta Barnes, the one whose family photographs I found in an antique shop in northern California.

When I first started researching, based on the information I found in the original photograph of Alta and her two older sisters, I thought perhaps Alta had subsequently lost both sisters, due to their apparent poor health. It was that serendipitous find of the newspaper cache at the Arkansas City library in Kansas that showed my assumption was wrong. Mollie, the oldest of the three girls in that original photograph, lived well into her eighties. I just had to find the right surnames by which to trace her life's story.

The first clue was a brief mention on the social page of the Arkansas City Daily Traveler on Friday, August 7, 1925:


That was it, just a fraction of a column inch on page five, but it provided a married name for at least one of Alta's sisters. I didn't yet know who it was, but the clue was gratefully noted.

I later learned that Mr. Fresh was Orin Roy Fresh, and that he and the Barnes girl—it turned out to be Mollie—had followed the path of so many others in the Barnes family and had gotten married just over the state line in Kay County, Oklahoma, in 1924.

When I found the other photo postcards besides the one I originally located, there was one featuring Mollie, front and center on the steps outside the door to a humble building. True to the tradition of the other postcards from Alta's family, this one had several labels on the reverse. One, at the very center of the card, said simply, "Aunty." A second note, in a different hand and type of ink, added, "Miss Mollie Barnes," and on a second line, explained, "Hardy."

Perhaps someone else thought "Hardy" needed more explanation, for yet another pen and handwriting style added, "Okla.," lest anyone assume it referred to Mollie's married name.

I have yet to find any documentation showing Mollie's residence in Hardy, Oklahoma—wherever that is. In both the 1930 and 1940 census, Roy and Mollie were living in Creswell Township in Cowley County, Kansas, the same county in which Mollie had lived almost her entire life.

I found little else on Mollie until 1958. The year of 1958 must have been a rugged year for Mollie. Barely six weeks after she lost her father at the end of October, her husband succumbed to "a lingering illness" on December 14. Like many other members of the Barnes family, Mollie buried her husband at Parker Cemetery in Arkansas City. And, after another twenty six years, she was laid to rest at his side.

That isn't quite the end of the story, though, for only a few years after Roy's death, in the 1962 obituary for Alta's own husband, I found mention of Mollie once again—only this time, she was referred to as "Mrs. Mollie Moore." Yet, by the time of her own passing in 1984, I could find no obituary in the Arkansas City newspaper, though I did find a funeral notice. Though family members were there to serve as her casket bearers, there was no listing of survivors.

Since there was no mention of the details anywhere else, it was back to her first husband's obituary to search for any details on Mollie's life. It was there that I learned the couple had moved to their property just outside Arkansas City in 1926, where Roy operated a saw mill. The couple also operated a farm at a different property near Dexter.

The main clue in this life review, however, was that Roy and Mollie had no children, possibly the reason why very little was mentioned about Mollie's passing so many years later. No mention of descendants, no work outside the home—other than the (surely demanding) businesses the Fresh family operated—and no significant community memberships all added up to a sadly lacking obituary when it was Mollie's time to say goodbye. 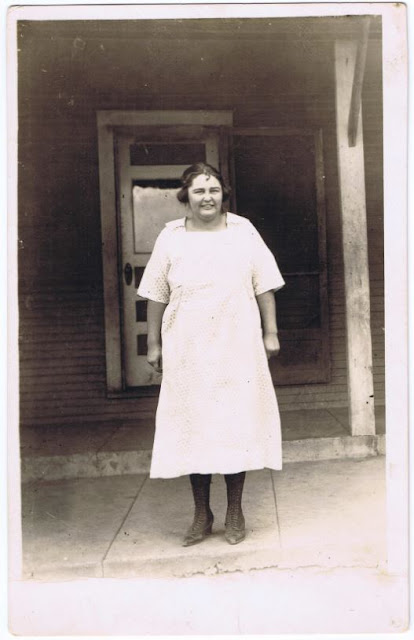