My attention has been kidnapped lately by a hundred-year-old postcard addressed to a Mrs. Henry Keefe in Red House, Nevada. Other than the space dedicated to inscribing that simple three line address, the entire card was crammed with details about the charming baby whose photograph was featured on the reverse of the Azo postcard.

It's true that I've given up on my previous pursuit, trying to find a descendant for the last series of photo postcards I had worked on—well, given up for the time being, at least. Hopefully, someone will eventually answer my emailed pleas and connect me with a likely prospect. For now, we need to set aside the five photographs from the Barnes family of Kansas, and see what else can be found in the collection of abandoned photographs I found in that antique shop in the foothills of northern California. I really want to send another one home.

With this old postcard, the one addressed to Mrs. Keefe, it was meant to go to a place so tiny, it isn't really even an official location on the map. Lately, Red House is categorized—at least in some places—as a "census designated place" in Humboldt County, Nevada. If you aren't familiar with that county, I'm not surprised; the only city the place contains is Winnemucca, the county seat.

But I'm not so sure the postcard ever got mailed. For one thing, it didn't look like it had suffered a run through the mail system, though perhaps it was sent, enclosed inside an envelope. However, if it did actually get mailed, I'm not sure how it would have arrived at its intended destination; looking at the closest census year (1920), it doesn't appear that there was anyone by that name living anywhere in Humboldt County, Nevada—Red House or elsewhere. Not even in the thriving metropolis of Winnemucca. 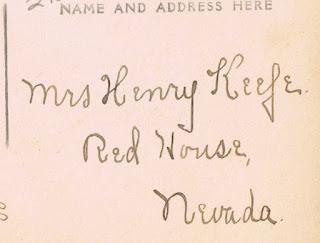 Above: Address written on the reverse of a hundred-year-old Azo photo postcard; photograph currently in possession of the author.
© Copyright 2011 – 2022 by Jacqi Stevens at 2:55:00 AM
Email ThisBlogThis!Share to TwitterShare to FacebookShare to Pinterest
Labels: Barnes, Kansas, Nevada