It was quite a gift, when opening the bag in which I had stashed the orphaned photographs I had rescued from an antique store in northern California, to realize that I had not only purchased one photograph of little Alta Barnes, but several of her family. While the original picture showed Alta with her older sisters, the one I want to share with you today features Alta again, but this time it was she who was the oldest of three siblings. The other two—her next younger sister Helen and baby brother James—stood in front of the same building where her own likeness had previously been captured about one hundred years ago, but this time, Alta was the teenager. And, unlike the earlier pose, this time she was smiling.

We'll discuss the little girl in this more recent photo later, but today, I'd like to focus on the baby in this portrait—mainly because of the corresponding discovery, in that archive of newspapers I found yesterday, of that baby brother's obituary nearly fifty eight years later.

The littlest one in this photograph was labeled Jimmie on the reverse of the picture, but he was officially known, in an adultier version of his toddler self, as James D. Barnes. Jimmie arrived in the Barnes family at the start of a new year, on January 24, 1920. He likely left all too soon for his family at the relatively young age of fifty eight, dying in Oklahoma City, Oklahoma, where he and his wife Jean had made their home.

Thanks to the library archives of The Arkansas City Traveler, the April 22, 1978, issue included a brief summary of Jimmie's life for those back home in Kansas who remembered him. His obituary clearly identified him as son of Forrest and Clara Barnes, listed his birth date and even where he attended grade school and high school.

Thankfully, the obituary also identified for us the married names of his sisters. Mollie was now Mrs. Moore, Nellie had become Mrs. Crouse, and Helen—the young child in the photo below—grew up to become Mrs. Burchell. Of course, we had already discovered Alta's married name, Williams, but the obituary helped steer me clear of my original speculation that perhaps the illness-plagued Nellie had not survived to adulthood.

Of course, seeing someone whose life seemed cut short—James died at age fifty eight—always causes me to wonder what might have happened. I look for details on what life might have been like for the person I'm researching. In James Barnes' case, his obituary provided some of the details, but it was through pursuing his wife Jean's name and the name of her business that I located the details to further explain James' story.

His obituary explained that


He was employed by Santa Fe Railway for 27 years in the clerical department and...was a veteran of World War II.


That, however, doesn't necessarily explain what might have devastated his health. I needed to delve further into this man's life story.

James Barnes seemed to be a business-minded person, since he "opened Jean Barnes Gift and Book Store" in Oklahoma City, back in 1960. Just in case the store was still in business, I decided to Google it. That was a good hunch. It provided me two memorials for Jim's wife, who had subsequently remarried and kept the bookstore running for many years afterwards. Among other gleanings, one mentioned that Jim had died "after a battle with lung cancer" and that the couple had originally moved to Oklahoma City in the 1940s, when Jim was transferred there by the Santa Fe Railway.

James Barnes seemed to have been generous in a practical sort of way, having a note in his obituary that the "family requests a memorial in his name to the elevator fund" at the Oklahoma City church he and his wife attended. What was more remarkable was discovering that Jim had not just one memorial posted on Find A Grave, but two. There was one for a headstone found at the cemetery back in Kansas where many of his family members were buried; the memorial inscription is shared with one for his sister Helen.

The other is a memorial found at his adopted home, Oklahoma City, in which James Barnes' name is inscribed with that of many others, under the heading:


In grateful remembrance of those who are laid to rest here. They bequeathed their mortal remains to further medical education and research in Oklahoma. 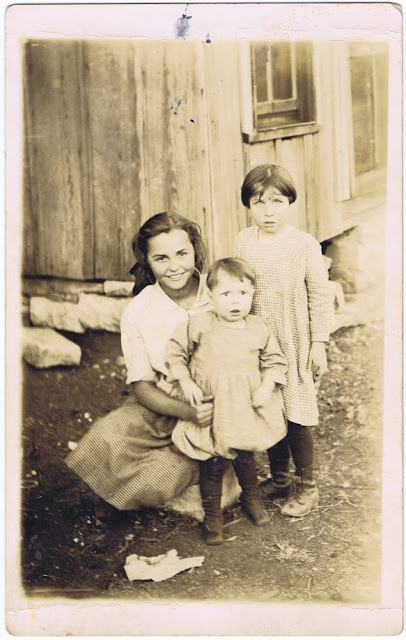 Above: Photograph of Alta Barnes Williams of Silverdale, Kansas, with her younger sister Helen and baby brother James D. Barnes; undated Azo Post Card circa 1922; currently in possession of the author.