Thankful for the People


It's Thanksgiving Day in the United States—a holiday we share in concept, though not necessarily the date, with our neighbors to the north, and, apparently, with pockets of others around the world.

While I'm sure whatever those first settlers in the New World wished to express thanks for differed vastly from what our over-indulged generation now appreciates, this is still a good time to turn our thoughts toward gratefulness.

Perhaps, when we pass that point of possessing everything we need, it is not more stuff that we are grateful for, but those very aspects of life which, in the losing of them, we feel the greatest regret. Perhaps that is why, this Thanksgiving, it is the people for which I am most grateful.

In this past week, I've been remembering some of those people whom I've lost, over the years, and I realize, in review, that for each one of them, I can attribute something for which I owe them thanks.

For my mother-in-law Marilyn, it was for her quiet, steady approach to the practical—those thrifty tips like folding back the rim on paper shopping bags to stand them upright as makeshift garbage receptacles—and her unmovable resolve to be there as support when the unthinkable inevitably occurred and, in the blip of a generation, I had stepped into the place she once had held.

For my sister-in-law Judy, it was her vivacious, unscathe-able approach to life that set her as far apart from my own tendencies as could be possible in two human beings, and yet she showed me that very different people can share the same love, the same devotion and the same determination. She taught me the power of loyalty, that endearing always-gonna-be-there-for-you determination that is stronger than any mismatched likes-versus-dislikes scorecard. She demonstrated the sense of family, no matter what.

My aunt, much like my mother-in-law, was a champion of the slow-and-steady approach to life, blending that thoroughness with an infectious cheerfulness and a nonstop spunk that left exhausted even those one or two generations removed from her. For her example of always reaching out, always being there—especially as a surrogate mother when we, as adult daughters, still felt the sting of loss—her constancy proved a great example. Like her own father, she demonstrated what it took to be one of those people for whom others say, "She never knew a stranger."

It was for my own mother, though, that it has taken the reprieve of time to mellow those thoughts of thankfulness. In retrospect—and, especially as I delve into her own family tree and push back through the generations of her heritage—I realize what a legacy she has left her children. Not in the riches most people seek as an inheritance, but in the tendencies she passed down to us, I owe her my desire to focus on the stories, to keep at the chase until I reach the goal, the ability to read between the lines and gain the wisdom hidden in those quiet inferences from the experiences of others.

There are others, of course, from whom I've learned a great deal and am certainly grateful. Likely, you can think of several in your own life, as well. Whether you've already consumed your own turkey feast, or are just now finishing up your morning's coffee and daily read to head into the kitchen to begin the day's preparations, I hope you will likewise have a moment to reflect on the benefits your family and friends have bestowed upon you. In turn, hopefully, you will be able to share those reflections among those with whom you share this pleasant day, and let that gratitude reap a harvest of its own. 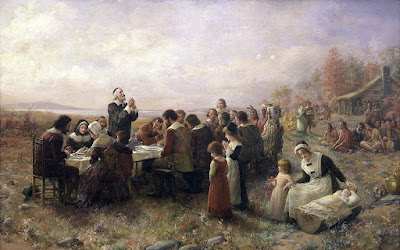 Above: "The First Thanksgiving at Plymouth," by American genre painter, Jennie Augusta Brownscombe; courtesy Wikipedia; in the public domain.

© Copyright 2011 – 2022 by Jacqi Stevens at 2:51:00 AM
Email ThisBlogThis!Share to TwitterShare to FacebookShare to Pinterest
Labels: Holidays and Genealogy