Sometimes, I wonder about the capacity of the human mind to become pickled in the stuff in which it's been steeping.

Take genealogy. What happens when one has spent a significant amount of time thinking, writing, eating and even sleeping genealogy? Does everything else take on that same sort of cast? Does it bend one's mindset in a different direction? I'm finding I can't even go on a simple, overnight excursion without having my mind twisted, pretzel-like, with contortions over the families intertwined in local history.

Yesterday, my husband had the opportunity to teach a workshop in a Bay Area community. Since I mainly work out of a home office, I thought it might be a nice change of scenery to grab my books and go with him. Since his training session's start time was in the morning, rather than fight commute traffic on a drive a bit too long for our early morning taste, we decided to arrange an overnight stay and couple it with dinner with friends.

On the short drive over to the venue yesterday morning, in a small community nestled at the southernmost reaches of the area dubbed Silicon Valley, my husband happened to remark that our destination—named Morgan Hill—actually was situated at the base of a hill.

Almost immediately, we both mused, "I wonder who Morgan was?" I made a mental note to Google this Mr. Morgan to see just why not only a hill, but a town, was named after him.

I had never been to the City of Morgan Hill before. The only thing I knew of it—save the convenient fact that it is neighbors to Gilroy, the Garlic Capital of the World (oh, and home to a healthy spread of outlet stores)—was courtesy of one of my first earthquake experiences after moving to California from New York. That 1984 earthquake—felt as far away as my home in the Central Valley—was even dubbed, "the Morgan Hill earthquake," despite the fact that the epicenter was not, exactly, located in Morgan Hill.

At first flush, my impression of the town bordered vaguely on my experience in Ireland. Why? Certainly not because of the aged patina of any weathered building exteriors—everything seemed quite flush with the newness of municipal development—but, just like Ireland, because of the lack of apparent street signs. If this city's powers-that-be didn't believe in adequate signage, how were we ever to find our way downtown?

My plan had been to settle at a favorite coffee shop after depositing my husband at his destination, but sensing that we were on the verge of becoming inconveniently lost, I felt my mind lapse from regular pre-coffee mode into what can only be experienced by those whose minds have snapped into genealogical overdrive. This was starting to feel vaguely like hunting for that missing ancestor from the family tree. I felt my mind, Pac-Man-like, nibbling away at all available clues, devouring any possibilities for surnames street names, mentally turning down every alley and byway to arrive, on time, at the correct destination despite obstacles.

Even when the street signs did show up—perhaps that first main intersection was an aberration—like calculating distant cousin relationships in an endogamous family tree, my mind started seeing the grid of city streets like multiple byways leading to the same patriarch. What was my mind thinking?

"There's the hill," my husband pointed out, almost as if navigating by the world's natural wonders.

It wasn't a monumental hill, but it was pronounced—enough to get us musing, again, about who that guy Morgan must have been. "We'll have to ask," I decided. Somehow, being wrapped in a tradition of genealogical research had put that discipline of seeing things in historical perspective foremost in mind.

As it turned out—I had to wait until arriving back home before I could check this one out—there was no Mr. Morgan. But there was a Mr. Hill.

Long before Mr. Hill's arrival in the area, though—and well before California statehood in 1850—the area had been part of a land grant bestowed upon a wealthy Californio family, which was subsequently sold to an immigrant family in 1846.

As often happens with large parcels of land, the property passed hands from one owner to another—sometimes in the aftermath of tragedy, sometimes by inheritance, but in this case, lastly on account of marriage. But we're genealogists, so we can follow this: the father, who originally purchased the land, actually had one of his sons named on the patent, duly processing the requisite paperwork with that son's name after California was ceded to the United States after the Mexican-American war. After drawing up the required documentation—but before the paperwork process was completed—that son was killed in a tragic steamboat explosion. His brother took over operations of the ranch—and then died, bequeathing the property to both his son and his daughter.

You likely guessed what happens next: within a year, the daughter married—a secret marriage, no less. Her suitor? A Missouri businessman by the name of Hill—Hiram Morgan Hill.

What about that hill? At one point, it had been named in honor of the family who had originally obtained the land grant from that Californio family prior to statehood. Remember that immigrant family? I thought you might be wondering what became of them. See, I felt vindicated in sensing that vague Irish hint to the community.

Their name was Murphy. You know, Murphy—the number one surname in Ireland. It was two sons of the family's patriarch—Martin Murphy—who subsequently left home and headed to the hills to strike it rich in the California gold rush (in the meantime founding the town in the Sierras still bearing their name).

That hill—the one not, as it turns out, named after a Mr. Morgan, though once known as Murphy's Peak—is now known as El Toro, a much more reasonable-sounding name for land once granted by the governor of Mexico to a family who sold out to Irish immigrants.

As for me, now that I'm back home at my comfy writing desk, I can rescue my mind from genealogical overdrive and settle back down for a peaceful stroll through my own family tree. It was good to get out—even to explore other people's family trees—but if my mind is going to gobble up ancestral clues, it may as well shoot for the goals in my own genealogical game plan. 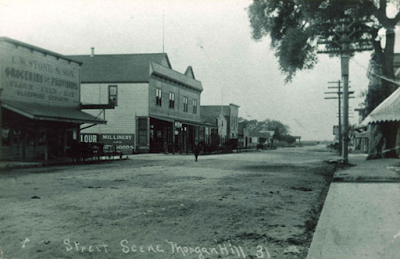 © Copyright 2011 – 2022 by Jacqi Stevens at 2:50:00 AM
Email ThisBlogThis!Share to TwitterShare to FacebookShare to Pinterest
Labels: California, Learning Opportunities, Local History