Weddings—at least in “The Old Country”—must have been quite the festive occasion. In examining the 1929 newspaper report of the wedding of John Laskowski’s daughter, Frances, it wasn’t lost upon me that the New World celebration of these children of Old Country emigrants started early in the morning, and lasted not only through breakfast but all the way through dinner, as well.

The article in the August 27 Queens Borough Daily Star reported every detail, it seems—down to the names on the guest list, which is fortunate for a genealogy researcher like me. I stumble upon my greatest finds, sometimes, while poring over the slightest details.

Before we proceed to that promised review of the guest list, however, I’d like to pause at the next paragraph in the report. After all, what would a whole day spent with family and friends be, if not filled with entertainment? And entertainment is exactly what was in store for the guests of the bride’s parents, John and Blanche Atkabowska Laskowski.

Though the newspaper gave no indication of exactly what kind of entertainment was in store for the guests, I have my guesses. Ours has traditionally been a musical family, and it’s likely that those named in the article were not just sharing their talents among family, but may have played gigs about town, as well.

The way I know this comes to me in a roundabout fashion. Years ago, while researching the surname of John’s wife—and you’ve got to admit, Aktabowski is not your everyday sort of surname—I discovered that some of the brothers had played professionally. One of the more recent Aktabowski descendants I discussed this with had mentioned that, due to its length and awkwardness, his musical relatives had chosen to shorten their surname. Let’s just say that Aktabowski wasn’t exactly a tidy fit on a marquee.

One Aktabowski descendant had told me that the name had been shortened and altered into a new creation—the stage name “Hark.”

While researching a family in New York with a name like Aktabowski has been a challenge—between handwriting atrocities and spelling variations, I’ve yet to locate anything more than the 1900 U.S. Census plus state census records for 1905 and 1915—I think it’s safe to say the family was a large one. Blanche Aktabowska apparently had twelve siblings—although I wonder whether some were duplicate identities resulting from a switch to Americanized names.

Among Blanche’s siblings were two brothers, one named Zygmunt, the other opting for the more Americanized Frank. While I’m not sure—at least, not at this point—whether these were the brothers indicated in my discussion with the family’s descendants, perhaps Frank and Zygmunt were the ones calling themselves by the shortened surname Hark.

Taking a look at the newspaper article—you know there has got to be a reason I’m belaboring this point—featured among the wedding entertainers at the Laskowski home happened to be two people listed only as “F. and Z. Hork.”

Could Hork be Hark? Could this be Frank and Zygmunt?

While I can’t be sure about any connections with the Irish-sounding or Italian surnames in the list, it is easy to tell that part of the day’s festivities were kept all in the family. Miss E. Laskowski was likely Frances’ sister and bridesmaid, Elizabeth. Walter Laskowski was their brother.

Who knows whether the bride and groom graciously stayed to the last, as the evening and dinner came to a close. While I have no idea what there was in the Hudson valley village of Rhinebeck that drew them upstate for their honeymoon—perhaps to gawk and dream of the various historic mansions from the “Gilded Age” of the previous century—I rather suspect the two young lovers made their escape from the celebration’s cacophony rather early in the proceedings. 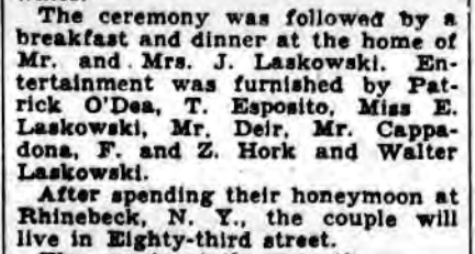 The ceremony was followed by a breakfast and dinner at the home of Mr. and Mrs. J. Laskowski. Entertainment was furnished by Patrick O’Dea, T. Esposito, Miss E. Laskowski, Mr. Deir, Mr. Cappadona, F. and Z. Hork and Walter Laskowski.
After spending their honeymoon at Rhinebeck, N. Y., the couple will live in Eighty-third street.