Late at night, just before Christmas Eve last year, a phone call came in that rocked our home, our upcoming holidays and, actually, gave us a very different New Year than we could have imagined. The stranger speaking on the other end of the line was telling me that my aunt—my only surviving relative from the previous generation—had fallen and broken her neck.

The week prior to that, we had arrived home from a business trip back east, and were then trying to cobble together a hasty Christmas. With this dire news added to the mix, Christmas suddenly became a blur. The focus turned to getting back east as soon as possible, with hopes to do whatever necessary on behalf of my aunt. Packing away all those festive decorations after the end of the holiday became a blur; I still don't know where I packed those ornaments. The time had, indeed, become bleak.

Somewhere in the midst of the dazed activity, I managed to post—in hopes of following footnoteMaven's Blog Caroling tradition—my comments on the Christmas carol that was ringing in my head through all that turmoil. While I had missed the deadline to participate for 2012, I still wanted to add my voice. I needed to add my voice to something uplifting, something promising.

As it has turned out, the entire year of 2013 was a challenging year. Just as the year started with news about my aunt, it closed out with the same. Christmas still seems to have that hazy aura; it may pass me by before I regain my composure. But this year, I don't want to miss raising my virtual voice and joining the Blog Caroling tradition.

Here, offered up once again after its original posting last December, is my contribution to footnoteMaven's holiday tradition: 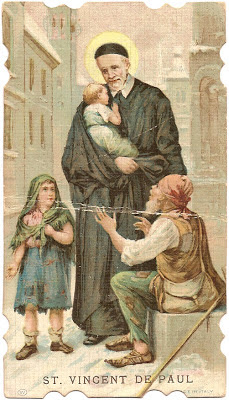 As I take the time, in this holiday break between Christmas and New Year, to sift through family keepsakes that remind me of the season, I can’t help but notice the carols that automatically begin playing in my head.

During the Christmas season, whether I’m near a source of music or not, I have beautiful traditional tunes playing in my mind—whether they are classical (like the Tchaikovsky Nutcracker), ancient (O Come, O Come Emmanuel) or contemporary (thanks to Mel Tormé and even David Foster and Amy Grant).

When I found the card I want to share today, the music that automatically came to mind was the Gustav Holst setting to Christina Rossetti’s poem, “In the Bleak Midwinter.”

This tiny card is not really a Christmas card. It is actually a keepsake from—or promoting—the Saint Vincent de Paul organization. On the reverse, someone from our family had written the name, “Wm. A. Stevens.” Of course, that name could have represented either Agnes Tully Stevens’ husband Will, or her son Bill—possibly even her grandson Bill. At this point, I guess I will never know.

The scene depicted on the card, though not a Christmas scene, carries the season’s message in helping others—particularly the less fortunate. Just looking at the stark surroundings and the cold colors in the background, I immediately think, “bleak”—prompting the music in my mind to strike up the melody for this very carol.

The scene also arrests me because, like those in our family’s heritage, I can’t help but think of those who don’t have the many blessings we count as our due. They are indeed blessings and gifts, given to us to pass along, both now and throughout the year ahead.

© Copyright 2011 – 2022 by Jacqi Stevens at 2:46:00 AM
Email ThisBlogThis!Share to TwitterShare to FacebookShare to Pinterest
Labels: Giving Back, Holidays and Genealogy, Keepsakes, Stevens, Tully