Could This Be the Same Woman?

I think I met my great-grandmother today. And I’ve come away from that meeting with a far different outlook than I held before this chance encounter.

As I rummage through my aunt’s belongings, I’m stumbling upon many items which connect with wisps of memories passed along to me—tales my mother would share throughout my childhood, now blended with the more recent recollections offered by my aunt in her last few years.

In yesterday’s post, I included a photograph of my great-grandmother, Martha Cassandra Boothe Davis. It was one I’d seen so many times over the last ten years, thanks to a choice my aunt made to dig it out of its storage place and to put it out on a shelf where it could be appreciated.

As I go through the boxes and envelopes of old, old treasures, I came upon another photograph of a tall, slender, upright elderly woman.

The photograph itself seems like an afterthought—not the traditional cabinet card of the time, with its rigid backing, but the cut photo paper slapped onto another slim cardboard backing, awkwardly aligned, almost neglectful in its careless juxtaposition. If there was any photographer’s insigne, it seemed to have been cut out of the presentation.

Thankfully, though the photographer’s art was lost in the picture’s transmission to our current times, our age permits tools to disassemble what the original photographer’s camera had captured. Using Photoshop, I blew up this mystery woman, not just to edit—though in the end, I left the full evidence of the misaligned layers for all to see—but to see if any details would emerge from this darkened scene.

Perhaps it is my imagination: is there a “D” that emerges in the lower right corner? Could that be part of the photographer’s identification?

As I increase the percentage of enlargement, I can see more details. The “stern” woman turns out not to be so austere, after all. With furs draped over her shoulders, she wears earrings and a locket placed at her neck which features the likeness of a woman. As I stare at this woman, yearning to know my great grandmother better, I wonder who it is that she seeks to honor through the wearing of that remembrance.

Perhaps her tightly-set lips are not pursed in disapproval of life, after all. Magnifying the details, it seems a softer ambience emerges—a light about her eyes, a quiet confidence, a strength not bereft of femininity’s touch.

As I draw closer to the possibility of liking her, of seeing the person behind the pose, I begin to wonder: is this the same person as was seen in the photograph yesterday? Or is she another?

And if another, who? 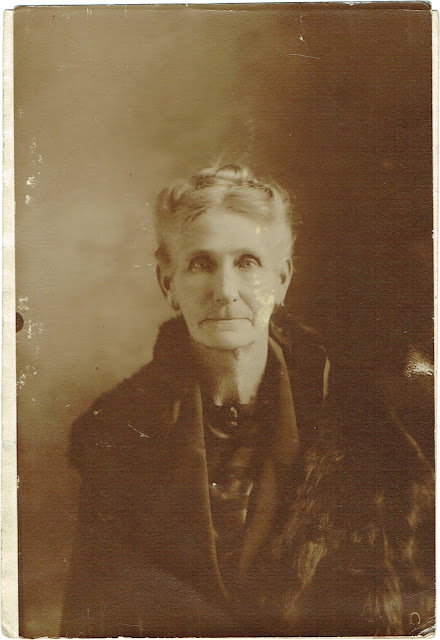