When trying to puzzle out what became of the daughters in the Edward Ryan family, the snare in the process was that invisibility to which marriageable-age women are so prone. I knew I had been able to trace one of the daughters of Edward and Johanna Tully Ryan—but which one? Mary? Or Margaret?

In attempting to solve the dilemma, the only documents I had been able to find yielded handwritten records which had been so badly overwritten as to make them unreadable. Or at least undecipherable. One record even had the name Margaret written on top of the name Mary—or was it vice versa?—making it impossible to discern which choice was the correct one.

Thus began a process of elimination, to determine which of Johanna Ryan's four children were still alive at the time of the 1900 census to verify her claim that only two of them remained.

We've already seen that her first-born son, James, was definitely alive and well—living in Glenwood Township in Walsh County, North Dakota, at the time, along with his wife Annie and their six surviving children.

Fortunately—at least for us, although undoubtedly not for Johanna's son at his untimely passing—I was able to find confirmation of one of the Ryan children who was no longer living. That would be the family's second-born son, Dennis, who was born in Ontario, Canada, on the last day of February, 1856.

Just as we'd seen with the rest of the Edward Ryan family, their son Dennis—named, undoubtedly, for Johanna's father, Denis Tully, just as one would expect from a traditional Irish family—had lived with the family in Ontario for all the census records in which I'd been able to find him. As a five year old, for the 1861 Canadian census, he was in the Ryan household in the township of South Dumfries in Brant County, near where his mother Johanna had grown up. Ten years later, he had moved with his family to the township of McKillop in the northern section of Huron County, Ontario. Even as a twenty five year old adult—still unmarried—he remained in his parents' household, according to the 1881 census.

This is where things get sticky. While Canada seemed to think Dennis Ryan was still counted among their citizens in 1881, a new territorial claim of their neighbors to the south seemed to be counting him, as well. While no American census record would divulge his arrival by 1880, other documents indicated his whereabouts by that same year. At least we now know that someone by the name of Dennis Ryan filed his first papers for naturalization at Grand Forks County in the Territory of Dakota on May 3, 1880, with the process completed, by then in Walsh County, in 1890.

Then, too, a land patent was filed in his name in October, 1884—about a year and a half after that of his older brother—for property in northern Walsh County, near James' land up near the border with Pembina County.

Where Dennis married his bride, the former Mary McMartin of Ontario, is yet to be determined, though. Whether it was back in Ontario or in their new home in Dakota Territory, I can't yet tell. But by the time of the 1885 Territorial census, Dennis and Mary already were claiming an infant daughter, whom they named Mary.

Their daughter Mary was the first of four Ryan children. Joining Mary, by the time of the 1900 United States census, were Chester D., "Catrine Jane" and Maggie Ryan.

If you were to take a long, hard look at that 1900 census record from which I drew those names, you might question me about my certainty that I have the correct family. After all, Ryan is a fairly common surname. But that isn't the issue which is the most pertinent about this 1900 record; it's the fact that there was no Dennis at all in this household. Mary, the wife, was listed as widowed.

True, her property was located in Walsh County, just as we would expect, based on the records for the land patent. And listed above her was the household of her brother-in-law, James, just as we'd expect from his land records. Even back in the territorial census, Dennis and Mary had lived close to family—witness her in-laws, Edward and Johanna, living close by in that census record.

It was thanks to an entry I had located at Find A Grave that I discovered when Dennis had died: on December 15, 1892. With further thanks to one volunteer—"HL49"—who answered my request for a photo of the actual headstone, I could now witness the clearly-etched details of that date for myself.

As would be expected for a descendant of Irish Catholics, Dennis Ryan was buried at Saint John's Cemetery in Grafton, part of Walsh County, North Dakota. According to Interment.net, the inscription on his headstone concluded with the sobering reminder:

We cannot tell who next may fall.
Beneath thy chastening rod,
One must be first, but let us all
Prepare to meet our God.

While it's unlikely that I'll discover the cause of Dennis Ryan's untimely death, the passing of this thirty six year old provided the clue as to the name of one of the children of Edward and Johanna Ryan who had already passed away. Of course, that alone is not helpful: it merely means one of the daughters was still living, as well. But which one?

As it turns out, following the widow Mary, while confusing some researchers, may help to clear up the story for the rest of us. 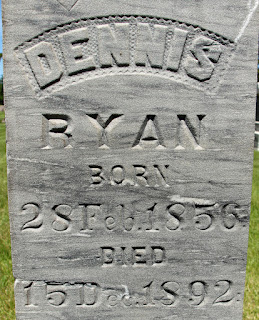 Photograph, above: Close-up of headstone from the Find A Grave Memorial for Dennis Ryan, located in Saint John's Cemetery, Grafton, Walsh County, North Dakota; with thanks for permission granted to use this photograph courtesy of photographer and Find A Grave volunteer, "HL49."
© Copyright 2011 – 2022 by Jacqi Stevens at 2:52:00 AM
Email ThisBlogThis!Share to TwitterShare to FacebookShare to Pinterest
Labels: Cemeteries, North Dakota, Ontario Canada, Ryan, Tully