From the date of Johanna Tully’s 1853 marriage to Edward Ryan in Ontario, Canada, to the point at which her husband gained United States citizenship in 1882, is it possible to trace their steps, now that it's over one hundred thirty years later?

Some documents have been digitized and scanned into online systems years ago. Others may have been added more recently. Whether any of them will serve our purposes in this particular search, we’ll find out shortly. We still have to face up to the fact that the vast majority of history’s mundane documents have yet to gain a footing in that virtual—and handily indexed—world which super-charges the genealogist’s tedious search.

Though they have yet to be added to one of my favorite free sites for Canadian census records—Automated Genealogy—the 1861, 1871 and 1881 censuses are included in the holdings at Ancestry.com.

In the 1861 census for Brant County, Ontario, we can easily find Edward and Johanna Ryan in the township of South Dumfries, along with their four children, James, Dennis, Margaret and Mary. Now married for eight years, Edward and Johanna have children ranging in age from eight to two.

Ten years later, still in the province of Ontario yet now situated in the township of McKillop in Huron North, Edward and Johanna’s children have all—well, except for the oldest boy, whose age may have been tempered by a fear of possible conscription—miraculously aged the expected ten years.

With the passage of another ten years, the 1881 census shows the Ryan family still in the same place. Though the geopolitical designations have changed—lines for the various “ridings” of the local districts were changed, bringing in an additional Huron Centre where the family was now listed—the family remained intact in their same household.

Shortly after that 1881 census enumeration, things changed radically for the Ryan family. I would love to discover what prompted this family of six to leave this familiar area behind and brave the unknown—not to mention the distance and rough terrain—in a land far removed from family.

Or were they really far removed from family? What I see next shows sons and daughters of a marriageable age, and possible signs of intermarriage with others whose surnames pop up repeatedly in records. Those records, however, are far, far from Ontario. They are not even in any western region of the new country of Canada.

The trail picks up, once again, in a place known at the time as the Territory of Dakota. At least, that is according to the immediate descendants of Edward and Johanna Ryan, for I was told that there was a certificate of citizenship, dated 1882, amongst the possessions of Edward Ryan’s descendants.

Would that have been possible, considering the family was just enumerated in a town twelve hundred miles east of the Dakotas, only one year previously?

Thankfully, though the larger online repositories such as Ancestry have yet to supply the documents we’re seeking, taking this question to the smaller local archives in North Dakota provides the answer we’re seeking. 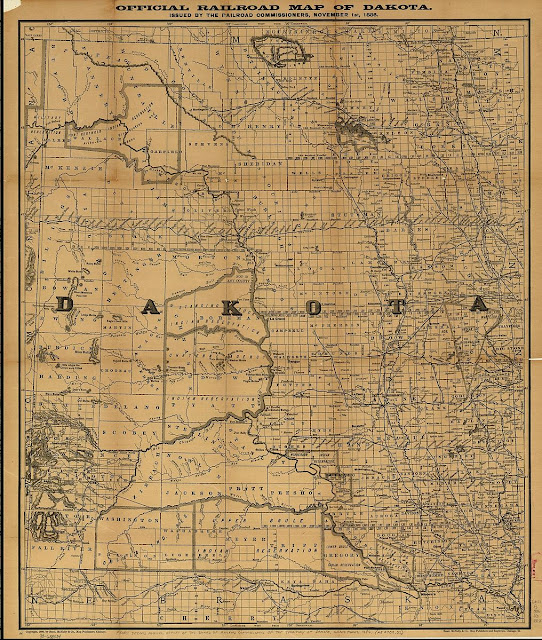 Above: The Official Railroad Map of Dakota, issued by the Railroad Commissioners (presumably of the Dakota Territory) on November 1, 1886; Rand, McNally & Co., map publishers, Chicago; courtesy Wikipedia; this graphic is now in the public domain.
© Copyright 2011 – 2022 by Jacqi Stevens at 2:46:00 AM
Email ThisBlogThis!Share to TwitterShare to FacebookShare to Pinterest
Labels: Immigration, On the Move, Ontario Canada, Ryan, Tully