Citizen of Yet Another Country

Tracking down what became of Edward Ryan—husband of great grandfather John Tully’s sister Johanna—started morphing into the genealogical equivalent of Where’s Waldo? (or, for you geeky homeschooling aficionados, Where in the World is Carmen Sandiego?) when he disappeared from Ontario after the 1881 Canadian census.

Showing up, coincidentally, nearly twenty years later in the 1900 census in the United States might not have been such a stretch if, say, he had hopped the border and taken up residence in much-nearer Buffalo or Detroit. Incremental changes are so much more believable. But in this case, we find Edward Ryan in faraway Grafton, North Dakota.

Having to puzzle out what became of the family in those frustrating in-between years, during the time of the missing United States census for 1890, could have been a challenge—if, that is, we had no local resources with which to complete our search.

Fortunately, there was a way to corroborate the assertion of a helpful distant cousin (and direct descendant of Edward and Johanna Ryan) and confirm that Edward did indeed become a citizen of the United States. The July 10, 1882, certificate of citizenship now held by this cousin had indicated it was issued by the “Territory of Dakota, County of Grand Forks.”

That the issuing body for this 1882 certificate would be the Territory of Dakota is easily confirmed: North Dakota did not become a state until 1889. Fortunately, the North Dakota State University has long been in the process of digitizing archives of such matters. Thankfully, their collection does include a record of Edward Ryan’s naturalization—with his first papers dated, as his great grandson had indicated, on July 10, 1882. The issuing county? Grand Forks, just as this cousin’s records claimed. 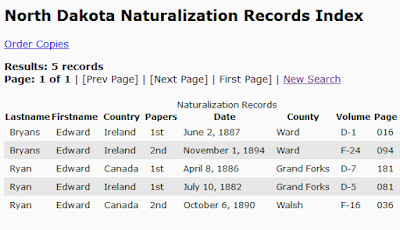 A second entry for an Edward Ryan in nearby Walsh County, dated October 6, 1890, may well have contained the file of our Edward’s follow-up paperwork. How would I know? That is the county where he and his wife Johanna were listed in the 1900 U.S. Census—along with their children and grandchildren.

Amend that: along with some of their children. As to which ones, I can’t yet say. Thanks to write-overs by long-gone census enumerators, I can’t be sure which of the Ryans’ two daughters was the surviving one. Barring the appearance of yet another distant cousin with convenient proof documents, we’ll have to muddle through this particular mystery by other means. 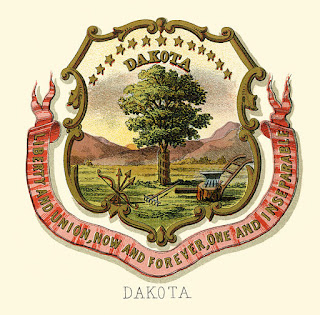 Above: Dakota Territory Coat of Arms, 1876; courtesy Wikipedia; artwork now in the public domain.
© Copyright 2011 – 2022 by Jacqi Stevens at 2:55:00 AM
Email ThisBlogThis!Share to TwitterShare to FacebookShare to Pinterest
Labels: Naturalization Records, On the Move, Ryan