The Significance of Memories Lost

If you live in a country which, once, had the habit of celebrating this time of the season as a holiday, you may recall the traditions that once prompted the urge to shop for a dressy pastel outfit, or gather as extended family for a commemorative meal. As I did my shopping yesterday—first at the local mall, then stopping at the grocery store on my way home from town—I wasn’t so sure anyone remembers, now.

It was distressing, seeing the racks filled with so many new clothes—packed so tightly as to make it impossible to pull out a hanger to even take a look at what was being offered for sale. Though the mall’s parking lot was nearly as full as it usually is, right before Christmas, it seemed all the people in town wouldn’t be enough to buy all that was offered for sale there. We are so overburdened with stuff. And yet, that is all this holiday weekend has been reduced to: an essence of things. More things. The merchandisers have stolen the meaning of our holidays—our holy-days—and we’ve let them.

Not that I begrudge anyone their recovery from recent economic downturns—I’m glad those times are past us. Shop away, my friend, if that is what you intend to do. More power to those who have the means to do so. But don’t let it be all that your life is reduced to. All of us have tokens of a heritage much richer than such trinkets.

That episode from the day’s errands became the evening’s dinner conversation. During the course of the discussion, I realized that not many people can even relate, now, to such historic upsets as the Great Depression. A good percentage of our current population doesn’t even have recollections of being raised by someone who was a child of the Depression. No stash of saved bread bags—there, mind you, not because Mama was a firm believer in recycling. She wasn’t doing this to Save the Earth; she was doing it to save pennies.

A prompt from Twitter, featuring a recap of recent interesting Tweets, showed up in my inbox as encore to the day’s observations. One, from Findmypast UK’s “Dapper Historian” Myko Clelland, displayed photos of four elderly women and commented,

These are the last four people on earth born in the 1800s. The stories they must be able to tell!

Considering the implication that these subjects must each be well over one hundred years of age, the virtue of their continued existence would be that we could, in theory, pepper them with whatever questions our curiosity now instigates—though the challenge would be to see whether they could actually remember what answers to provide.

Despite that continual litany heard by fellow genealogists the world over—“If only I had thought to ask them when they were alive”—we do have recourse in this dilemma. It’s known as print media: those books, newspapers, journals, letters and other documents preserving the words of prior generations via ink on paper.

The only problem is: they are silent testaments. They need someone to serve as catalyst to get their message out. To lift the stories off the pages of the past and put them back in circulation.

That is where we come in: we are the story-tellers. We are the ones who connect the memories of the past with a new generation of rememberers. We are the connectors linking our collective past with the agents of the future.

Whether you are a blogger, actively telling your story to everyone who chances upon your digital domain, or a researcher with the best of intents to “someday” pass that story along, I hope you realize the crucial role you play in keeping your family’s—and your culture’s—story alive.

Stories only live as long as they are still told. Their meaning retains its viability only as long as they are being shared. What is important to you will be important to no one else, once you are gone,  unless you see yourself as the vital link you are—and put that belief into action. Otherwise, your valued family traditions and history will devolve, first, into hollow tokens and eventually, into meaningless trinkets of a bygone era few can even understand. 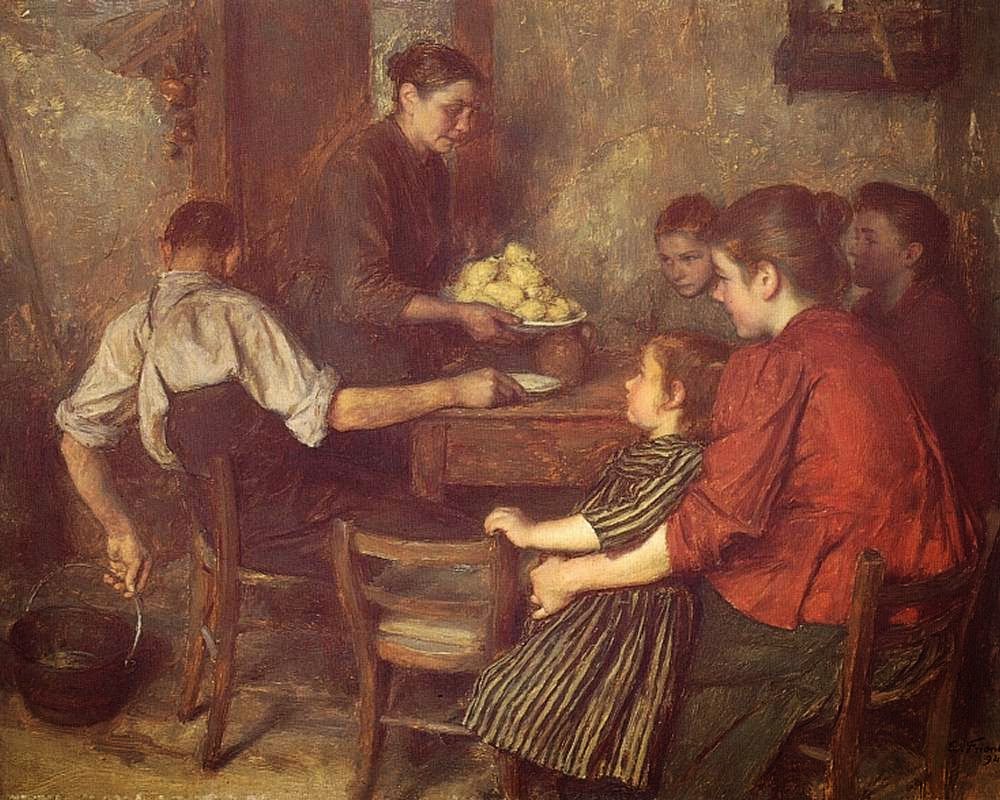 Above: "The Frugal Repast," painting by French artist Émile Friant; courtesy Wikipedia; in the public domain.
© Copyright 2011 – 2022 by Jacqi Stevens at 2:42:00 AM
Email ThisBlogThis!Share to TwitterShare to FacebookShare to Pinterest
Labels: Holidays and Genealogy, Leave a Legacy, To Tell the Story