The Honor of Their Presence

While it may seem somewhat unusual to include an entire guest list in a published wedding announcement, that may be me superimposing my modern “sensibilities” upon a near-century-old gathering. After Mr. and Mrs. John Laskowski sent out their invitations for the marriage of their daughter Frances to young Philip J. Hanlon, they saw fit to include the list of attendees in the 1929 newspaper article.

Whether the custom of the time or not, the announcement, published on the front page of the second section of the Daily Star on Tuesday evening, August 27, provides us an excellent opportunity to examine, in minute detail, who might have been the relatives among those festive attendees.

For one thing, the article provided the names of the groom’s parents (well, at least in the “Mr. and Mrs.” format) as well as those of his siblings. Thomas Hanlon and his wife apparently had just as large a family as had the bride’s parents. We now know of Philip’s brother, Thomas junior, as well as their sisters Mary, Margaret, Gertrude and—possibly causing a need for creative nicknaming—Frances.

The announcement also provides us a listing of the bride’s siblings. Of course, thanks to his entertaining talents, we’ve already been introduced to Frances’ brother, Walter Laskowski, as well as twin sisters Severa and Elizabeth. In addition, the list also mentions daughters Blanche and Rita.

While I’ll include a transcription of this part of the article below, let’s cherry pick a few more names here. I had offered my guess, the other day, that entertainers “F. and Z. Hork” might well have been members of the Atkabowski family—the elder Blanche Laskowski’s siblings—who had chosen to shorten their surname for stage purposes. The guest list mentions them again: Mr. and Mrs. F. Hork, and Mr. and Mrs. Z. Hork.

In addition, there is one more Hork couple: Mr. and Mrs. G. Hork. I am guessing that would be Blanche’s brother Gustave. It is here that I feel the frustration of that socially-acceptable naming device, for I have yet to discover the name of Gustave’s wife—let alone the fact that he even had one. Perhaps this is a clue for me to start searching under the shortened name Hork, as well as the alternate spelling Hark that I had been told about, years ago.

Interestingly, in the midst of naming all these Hork couples, there is a mention of a Mrs. Aktabowski. Perhaps this would be their mother, Aniela Zielinska Aktabowski, who often went by the nickname Nellie. She is the lone mention in the guest list of the full version of that surname.

While there are many names I don’t recognize, a good number of them sound like fellow Polish-Americans. Those are the ones with names like Cordelski, Fialkowski, Sokolowski and Kordecki. Are they relatives? Who knows!

I spy my aunt—my father’s sister—amidst the guests, listed as Mrs. D. Eggert. Why her husband was not with her, I don’t know. However, I know nothing would have kept her from attending Frances’ wedding. I have a copy of a taped interview my brother did with her before her passing, in which her reminiscences included a mention of Frances as her favorite cousin.

Along with my aunt’s name in the guest list was that of her mother, Mrs. T. McCann. That would be Sophie, John Laskowski’s sister, in her sleek new, Americanized image, complete with Irish-sounding surname. She, too, had attended without the company of her husband.

Rounding out the guest list—at least among the names I recognize—was one additional curious entry: Mr. and Mrs. M. Laskowski. Could that be John and Sophie’s brother, Michael "Lasko"? Was that a dig by the more-traditional John to remind his brother of his true roots? There is no other M. Laskowski in the family that I know of, other than their mother, Mary Laskowski—but she, if attending, would have been listed under Mr. and Mrs. A. Laskowski.

Which brings up a good question: where were Anton and Marianna Laskowski on the day of their granddaughter’s wedding? 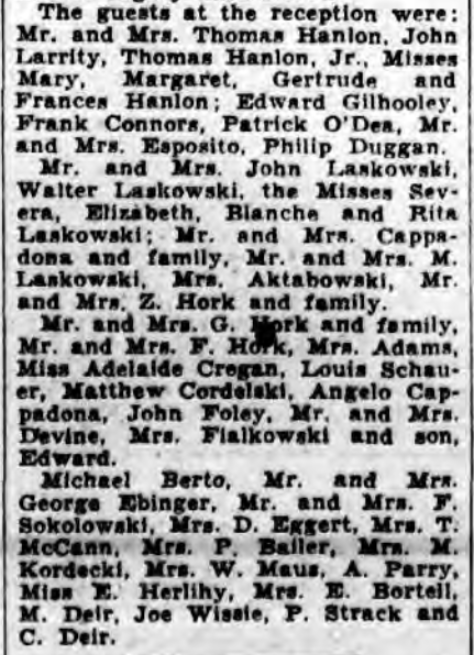