When all the usual places—digital repositories for documents such as census records or birth, marriage or death records—fail the dogged genealogical researcher, the next best place, in my opinion, is to head to the newspapers.

Let's just say, in trying to secure the connection between my grandmother Sophie’s brother Michael Laskowski and his American remake as Michael Lasko, I haven’t had the best of outcomes. While Michael said he had filed for his naturalization papers, I sure haven’t been able to find them—not under Laskowski, nor under Lasko. And I can’t, yet, be sure the Michael Lasko appearing in the New York City census records along with wife Mary and sons Albert and Wilbur is actually the Lasko who used to be a Laskowski.

The problem: I see no smoking gun. I have no evidence to connect the two. So I go looking through the newspapers. Surely, there is some mention of this Michael Lasko that connects him to Sophie Laskowski.

We have already romped our way through The Brooklyn Daily Eagle, thanks to the portal at the New York Public Library. In addition to finding the engagement and wedding announcement for Michael’s son Wilbur, I did happen to find a small insertion on the third page of the edition for April 14, 1909, that was of interest:

Here was their own entry, under the imposing title, “Marriage Licenses, Issued in Brooklyn for Twenty-four Hours Ended at Noon To-day.” It was plausible that this could be our Michael Lasko—if, that is, you could believe the report from the passenger records at Castle Garden in which he was declared to be four years of age in 1889 and don’t mind mixing it with the considerable fudge factor of a couple years age difference.

Now, on to the scramble: did I have any record of our Michael’s place of residence? While there was no sign of Michael anywhere in the 1910 census, over at the Brooklyn home of his parents, Anton and Mary Laskowski, what should I discover in the enumerator’s notes but that very same address: 133 North Eighth Street.

I’d say that would qualify as this researcher’s smoking gun. 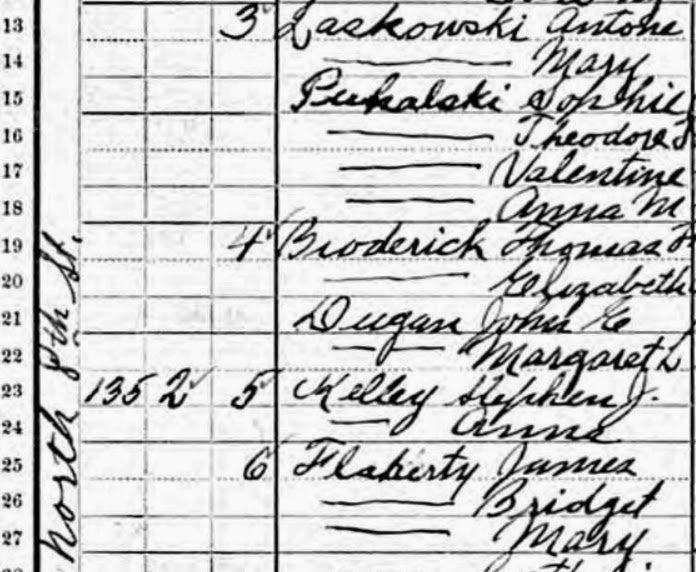