Today is one of those days Americans love to hate: Income Tax Day.

Here in the U.S., our income tax paying roots would have stretched back to the War of 1812—but for the fact that politics being politics, the tax, proposed in 1814, couldn’t get itself implemented before the end of hostilities in 1815.

Wars and taxes seem to have gone hand in hand, however, for by the time of the American Civil War, Congress introduced what was to become the country’s first personal income tax. It was, however, not to be long-lived, for it was repealed and replaced by a different wartime income tax in the subsequent year.

The first peacetime income tax in American history didn’t arise until 1894. If your roots included those fortunate enough to earn at least $4000 for the year, your ancestors would have had to pay two percent on that amount. Not to worry, though: incomes of that level were only achieved by less than ten percent of American households of the time.

I suspect my husband’s great grandfather, Chicagoan John Tully, was not among those fortunate few. Though he likely was pleased to be more financially successful than he would have been, had his Irish parents chosen to leave him in the County Tipperary townland of his birth, he still showed signs of great concern over his financial status—and, regarding which, what the government considered their rightful claim.

How do I know this? He left his records of tax payments among his most important papers—which, of course, meant his record-hording daughter Agnes Tully Stevens felt it her duty to carefully store those records for future years, just in case. Which meant her son Edward accepted the responsibility of preserving them for…for…well, who knows what. But when Uncle Ed passed away, who should the family think would be the appropriate person to step into the role of family records archivist? Why, the gal who peppered Uncle Ed with all those genealogy questions, of course! 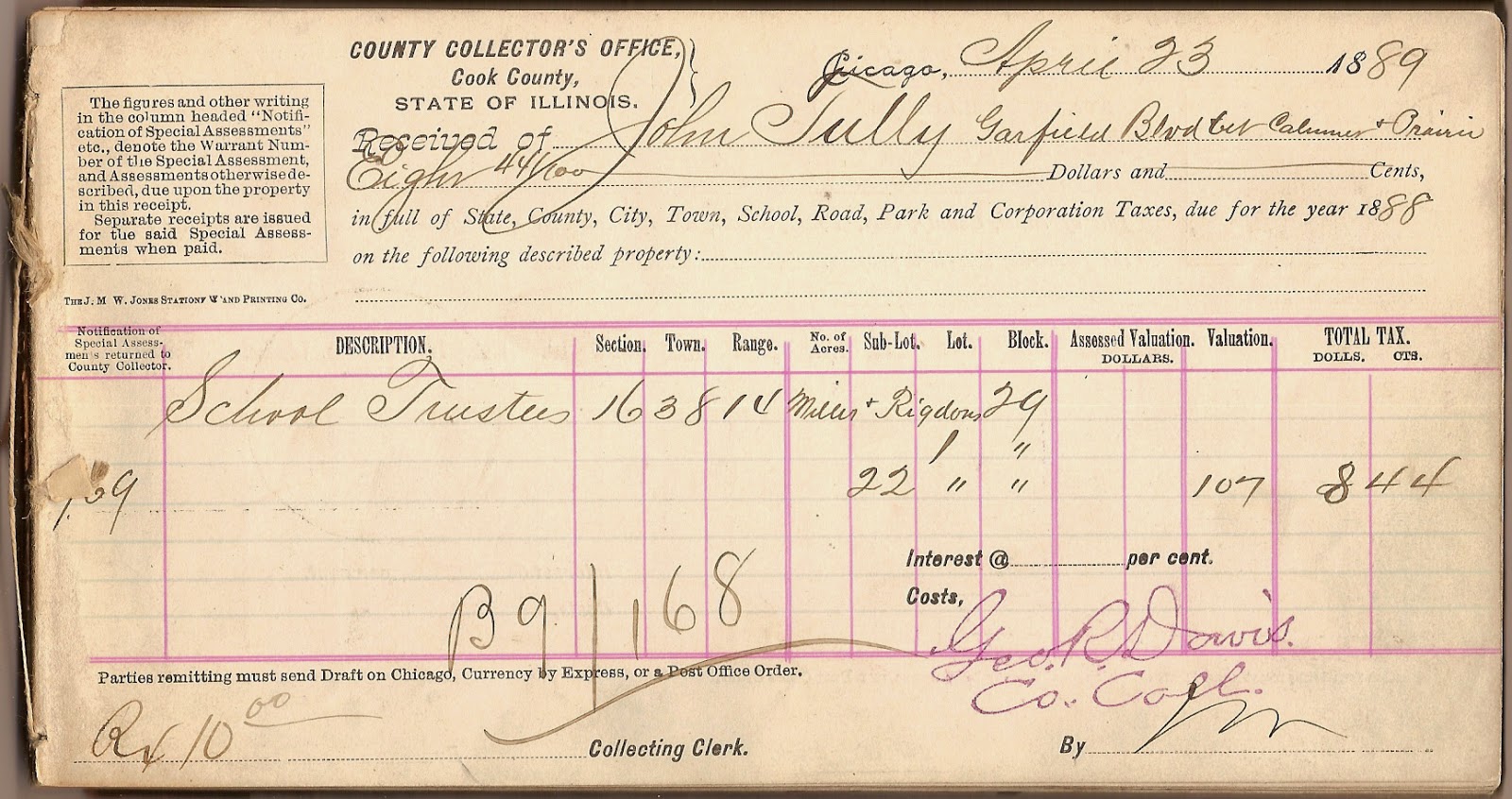 When I look at the pages of those old tax records—receipts from April 23, 1889, for example—I can’t help but see John Tully’s taxpaying ledger from the perspective of the tax history timeline of our nation. While he certainly wasn’t eligible to be taxed at the national level at that time—and by the time the Federal Income Tax, as we know it, was instituted in 1913, he was long gone—he did, however, have to pay his due to local taxing authorities.

Being almost a civil servant, having served in the South Park police force of the era (before it became part of the Chicago Police Department), John Tully faced a two-edged sword: what he hated paying for in taxes, he most certainly needed as salary to meet his family’s own financial needs.

Perhaps his concern over such taxing matters was inherited by his daughter, Agnes. Maybe that is why, preserved among that stash of tax receipts, was a chart illustrating the ubiquitous “Where Your Tax Dollars are Spent” topic fielded by most local governmental entities. This must have been quite important to them—or maybe no one knew to throw it out, after Agnes died. For what it’s worth, I know—and now, you do, too—how the City of Chicago spent its residents’ hard earned money in 1917. 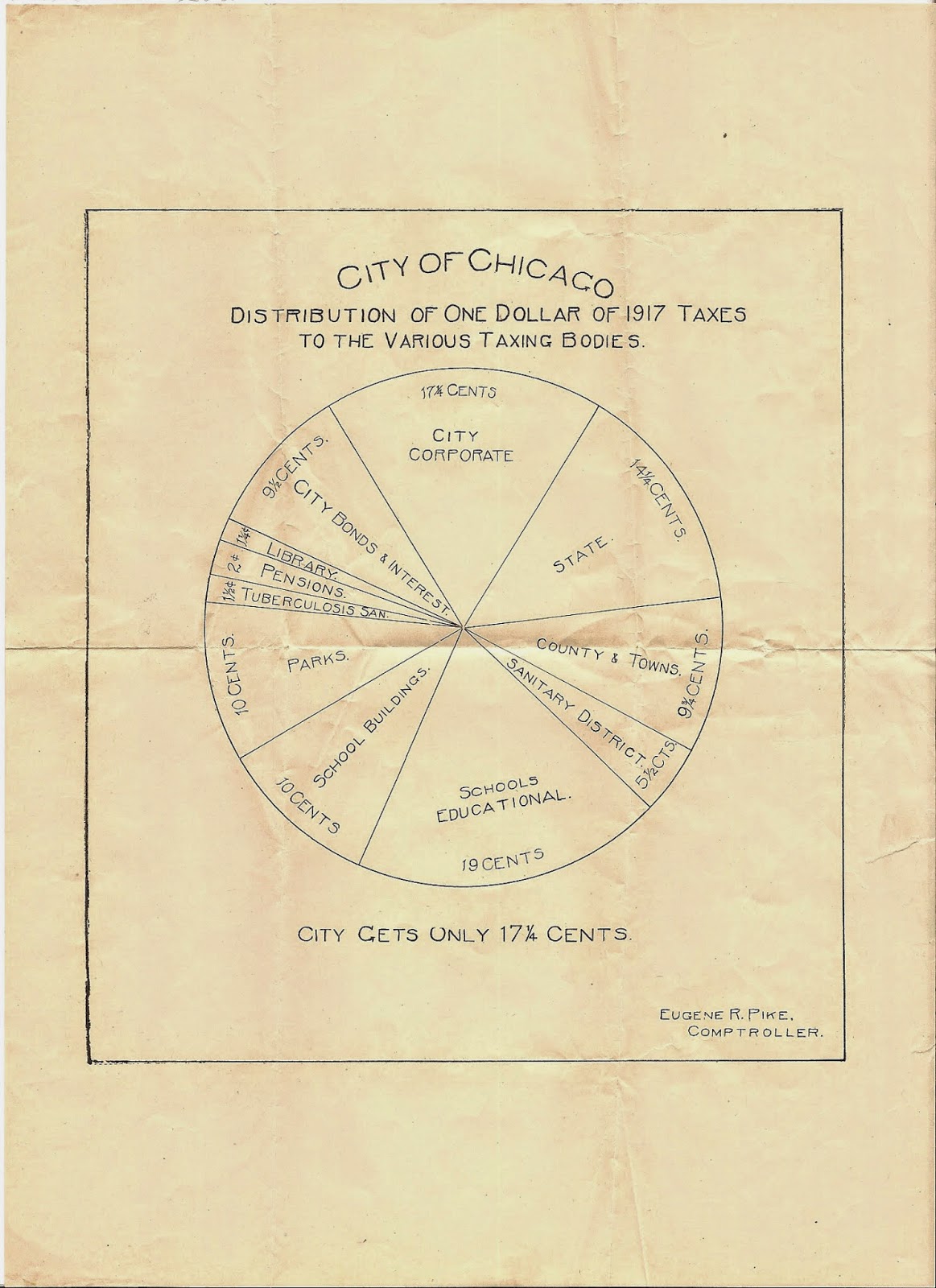 Taxes couldn’t have been too outrageous, however, judging from a historical perspective. Though John Tully was no longer there to pay such rates, by the time federal income taxes were implemented, the top rate was only seven percent—on incomes above five hundred thousand. In case you’re wondering, that would be well over ten million in today’s money.

An interesting set of charts at Wikipedia delineates the history of federal income tax rates—and then adjusts them for inflation—in case you are curious about what your American ancestors did have to pay. Handily, the chart extends to the year 2010, giving us a bird’s eye view of how much the government could “feel your pain” in any given year. It certainly shows which years were designed to “stick it to the rich”—the war years of 1941-1946 and again in 1964-1965—and which ones really did deliver the “taxpayer relief” various Acts purported to provide.

Still, history buff that I am, there is nothing about April 15 over which to be enamored. While we history types like to imagine simpler days of the past, those tax woes used to stress out our forebears just as much as they do us. And though we can take heart that, after the close of financial reporting for Fiscal Year 2014 today there will come an April 16, we can’t help but realize it’s but the first day of the rest of a new taxpaying year. 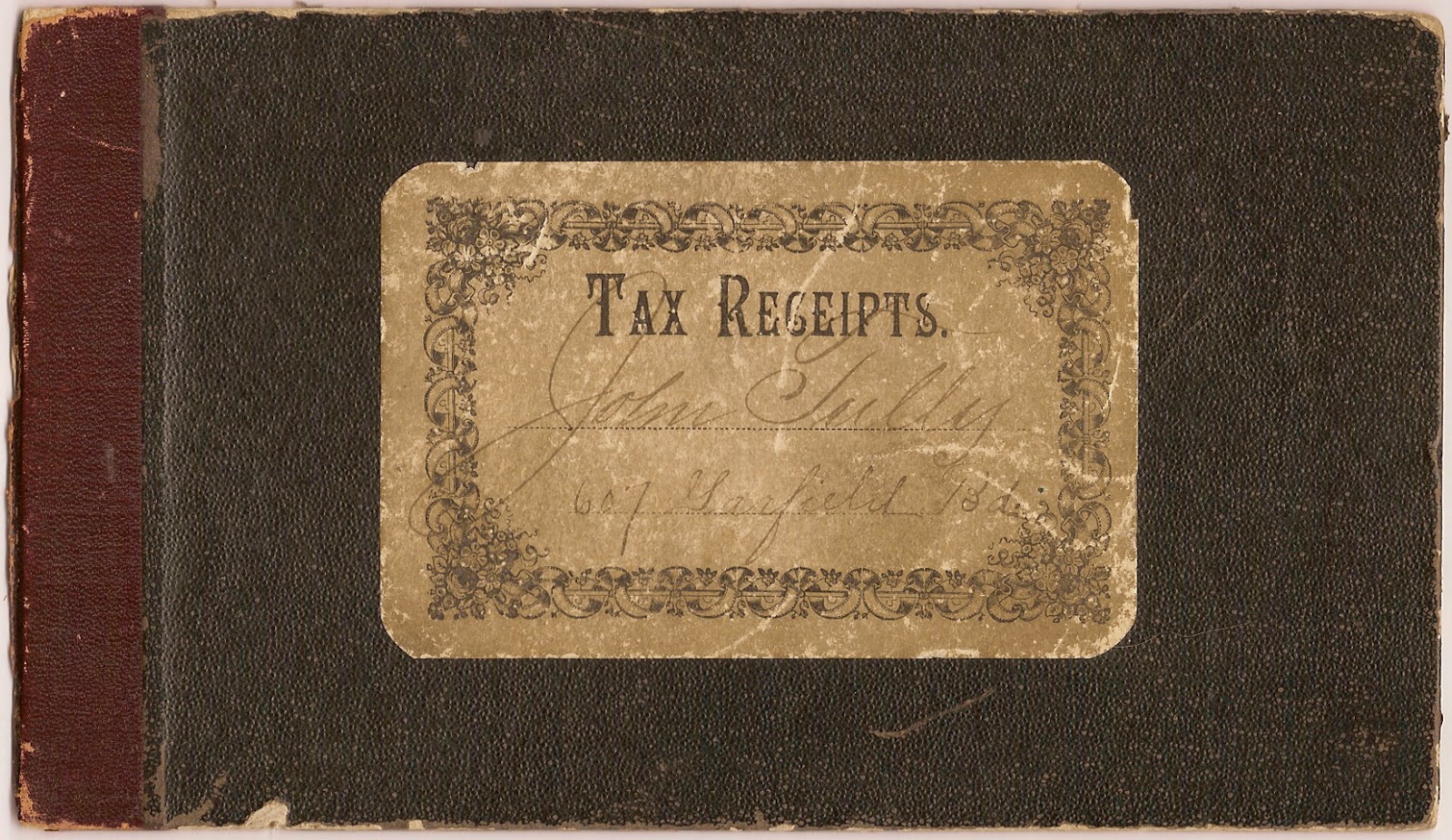 © Copyright 2011 – 2022 by Jacqi Stevens at 2:43:00 AM
Email ThisBlogThis!Share to TwitterShare to FacebookShare to Pinterest
Labels: Chicago, Family Journals, Tully