Given in Marriage by Her Father

When Frances Laskowski met Philip Hanlon at the altar of Saint Adelbert’s Church on Saturday morning, August 24, 1929, she became both the first and the last of the daughters of John Laskowski who were given in marriage by their father. Just before the new couple was able to celebrate their first anniversary—and two days shy of his fiftieth birthday—John breathed his last.

None of this, likely, was foreshadowed during the festive event in 1929—not even the broader historical perspective of the financial debacle about to envelope the nation had yet inserted its foreboding that year. This day—August 24—was simply a day for family and friends to join together in wishing the newlywed couple a lifetime of happiness.

Thankfully, for those of us wanting to look back upon this event from our vantage point of eighty five years in the future, the details of the day were carried in the Queens borough edition of the New York City Daily Star. The article included all the expected descriptions: names of both sets of parents (well camouflaged within the socially acceptable format of “Mr. and Mrs.” husband’s-name-only), location of the ceremony, details of the bridal gown and bridesmaids’ outfits.

The report also alluded to requirements of the event that would only be familiar to those practicing Catholics who remember how things were done in the old days: a morning ceremony celebrating mass, by tradition requiring both the bride and the groom to fast prior to communion that morning—thus explaining the custom of the breakfast meal immediately afterward.

What was most valuable about reading this report in the Daily Star, however, was not in its gift to us in sharing a glimpse into the ambience of the festive occasion, but in the long list of names that was to follow the ceremony’s description. As much as the later newspaper report of John’s passing didn’t reveal those significant names we researchers long to see, this wedding announcement made up for in every minute detail.

The guest list, in fact, was so long as to require me to save it for another post. Tomorrow, we’ll see what can be deduced from the list left waiting for us in the August 27, 1929, edition of the Daily Star. 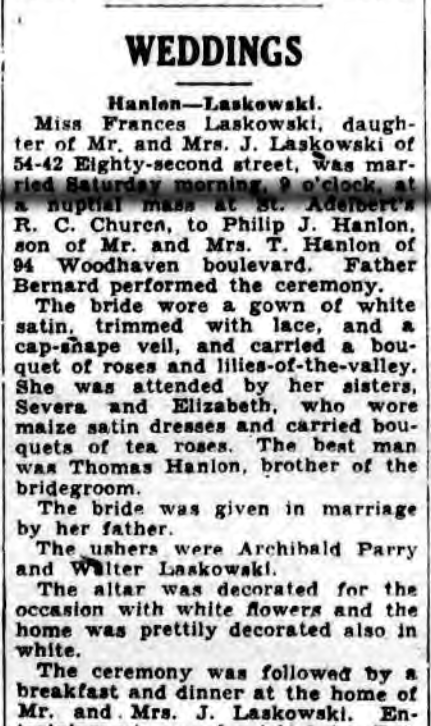 Miss Frances Laskowski, daughter of Mr. and Mrs. J. Laskowski of 54-42 Eighty-second street, was married Saturday morning, 9 o'clock, at a nuptial mass at St. Adelbert's R. C. Church, to Philip J. Hanlon, son of Mr. and Mrs. T. Hanlon of 94 Woodhaven boulevard. Father Bernard performed the ceremony.
The bride wore a gown of white satin, trimmed with lace, and a cap-shape veil, and carried a bouquet of roses and lilies-of-the-valley. She was attended by her sisters, Severa and Elizabeth, who wore maize satin dresses and carried bouquets of tea roses. The best man was Thomas Hanlon, brother of the bridegroom.
The bride was given in marriage by her father.
The ushers were Archibald Parry and Walter Laskowski.
The altar was decorated for the occasion with white flowers and the home was prettily decorated also in white.
The ceremony was followed by a breakfast and dinner at the home of Mr. and Mrs. J. Laskowski.